A picture-by-picture look at the most dramatic goal of the weekend.

No goal was more dramatic last weekend than the one scored late by Ferris State last Friday night in their WCHA game against Bowling Green. The Falcons had jumped out to a 3-1 lead with a pair of goals in the third period. Ferris State scored a goal with just under two minutes in regulation to cut Bowling Green's lead to 3-2. They pulled goalie CJ Motte with about a minute and a half remaining, but were quickly running out of time when Cory Kane scored his third goal of the season with just 9 seconds left in regulation to tie the game, and help Ferris State secure a 3-3 tie to stay unbeaten in WCHA play.

How was Ferris State able to tie the game so late? Let's take a closer look at what the Bulldogs did. 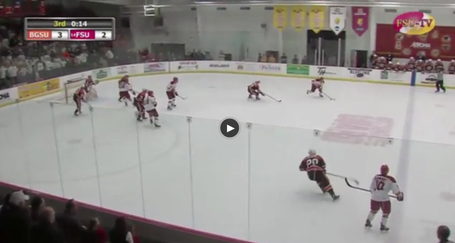 We start things off with 14 seconds left on the clock. Ferris State has established possession in the Bowling Green zone. Defenseman Ryan Lowney, seen in the lower right hand corner of the picture has just passed the puck defenseman Scott Czarnowczan who is holding the puck at the right point. Bowling Green has this defended pretty much exactly how you'd draw things up on the whiteboard. The two forwards are a little extended, but putting pressure on the points, two defensemen are protecting the front of the net, and the center is helping out in the slot.

If you only count five Bulldogs in the play, that's because forward Justin Buzzeo is just off frame in the lower left corner of the picture, and with everybody else pretty well covered, that's about the only choice Czarnowczan has. Cory Kane, the goal scorer, is the Bulldog standing right between the face-off circles in the high slot area. 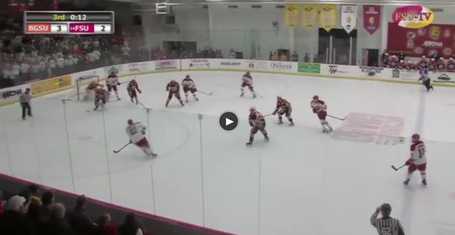 Buzzeo has slid up from the corner to give Czarnowczan an outlet to pass it to. It's worth pointing out that Czarnowczan doesn't just make the pass and stand there. He makes the pass to Buzzeo and then continues skating to follow his pass. His defender follows him which clears out space on the right side of the ice. With one less defender on the right side of the ice, that allows Kane to drift away from the slot to about the top of the right circle.

Bowling Green has Buzzeo's path to the net well-defended, and there's not much the two Bulldogs closest to the net can do. Buzzeo will fake a shot to try and freeze the defense, but this is a pass all the way. Nobody is able to account for Kane at the top of the right circle. Neither of the two Bowling Green defenders down low on that side of the ice can move out to Kane without leaving a Ferris State player wide open in front of the net. And both Bowling Green forwards were a little too extended to get back in time to block off that passing lane. 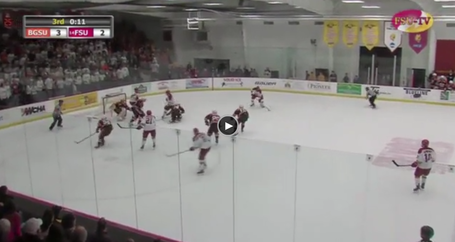 Kane receives the pass from Buzzeo, and now Kane has the game on his stick with pretty much every Bowling Green defender on the wrong side of the ice. Bowling Green's center put himself between his man and the net when Buzzeo had the puck, and now can only weakly dive out Kane as he tries to maneuver around the other Bulldog he was checking. Bowling Green goalie Tommy Burke had to stay at home to respect that Buzzeo might shoot the puck, and now has to slide across the net for Kane's shot.

Kane doesn't quite one-time the puck, but is able to cleanly receive the pass and fire off a wrist shot before Burke is able to slide over.

...and we're headed to overtime in a game Bowling Green thought they had in the bag.

If you want to see the video of the goal, it was the NCAA's number one college hockey play of the week. You can watch all five plays, or skip ahead to the 1:04 mark to just see this one.

It's worth pointing out that the box score for this game says that neither team used their timeout. But Ferris State was able to execute this play about as well as any coach could draw it up. They were able to out-man the Falcons down low, leaving Kane unaccounted for, and Czarnowczan makes a quiet, but difference-making play by taking the forward on that side of the ice out of the play. The end result is the Bulldogs basically get a clear pass from face-off dot to face-off dot to a wide open shooter. That's about as perfect a situation as a team can hope for down by a goal with just seconds remaining.