After winning this year's Clark Cup championship, the Indiana Ice franchise will be going dormant next season. The USHL will hold a dispersal draft on Friday morning at 9AM CST to distribute the remaining players from the Ice to teams around the league.

Every player on the Ice's roster and affiliate list will be up for grabs in the draft. The draft order hasn't officially been released, but it is expected to follow the same draft order as the Phase I and Phase II drafts, meaning Fargo would have the first overall pick.

As far as the players available, here are the players that ended the year on Indiana's roster: 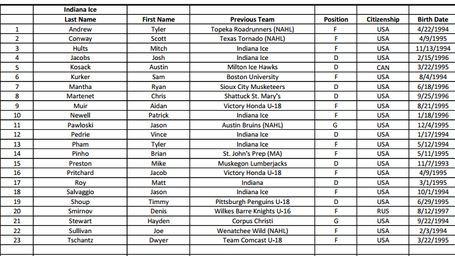 Of those players, obviously Mike Preston, as a '93, ages out of juniors. A number of those players will also be headed off to college next year. Date of arrival in the NCAA is a constantly moving target, but my best guess is the following players will be off to college next year: Tyler Andrew, Scott Conway, Josh Jacobs, Austin Kosack, Aidan Muir, Vince Pedrie, Tyler Pham, Brian Pinho, Matt Roy, Jason Salvaggio, Timmy Shoup, Joe Sullivan, Hayden Stewart and Dwyer Tschantz. Those players apparently still have to be selected, but will go later in the draft after all the players with a chance of playing in the USHL are selected.

The Ice also had a pretty well-stocked affiliate list.

Of those players, Alex Talcott is likely headed to Michigan next year. Michael Turner recently signed an OHL contract with Oshawa, so he won't be picked either. Everybody else should be available though.

So that is who is available. But who are the real prizes?

As soon as word of the dispersal draft spread throughout the league, rumors started that Fargo was interested in St. Cloud recruit Patrick Newell with the first pick. Newell is a smaller player, but extremely skilled, and stronger than his frame would suggest. He scored 43 points in the regular season this year, and seems primed for a breakout year next year.

Youngstown holds the second overall pick, and all indications have them going after Russian-born Penn State recruit Denis Smirnov. Smirnov is another smaller forward with elite-level talent. If there's one concern, Smirnov will go through the ultra-shady CHL Import Draft this summer, and while there hasn't been a lot of talk about the CHL, teams generally aren't willing to tip their hand too much if they think they've got a shot at a player. But if Youngstown can add Smirnov to a potential top line of Kyle Connor and Maxim Letunov, that would be by far the most exciting, and dominating line in the USHL next year.

The picture gets a little less clear beyond the top two picks. One of the favorites to go next is likely St. Cloud recruit and likely NHL Draft pick next month, Mitch Slattery. Slattery had a great senior season at Hill-Murray, and he could make an immediate impact in the league next year as a scorer. Troy Terry is another high-scoring forward off their affiliate list that will likely be taken.

Forward Jacob Pritchard is committed to St. Lawrence, though likely to play another year in the USHL and would be a solid addition to any team. Mitch Hults is uncommitted though reportedly has NCAA offers. The speedy forward had a pretty strong playoff run. He'd take an overage spot on somebody's roster, but would add good USHL experience.

For a team looking to bolster their blueline, North Dakota commit Ryan Mantha and Chris Martenet are two huge defensemen that would provide size and defensive presence next season. Boston University commit Vas Kolias is a smaller, puck-moving defenseman, but like Slattery, is the type of player ready to make an immediate impact in the USHL next year.

The Ice were also extremely deep in goal. Minnesota State commit Jason Pawloski was the Clark Cup MVP, and could come in and be a starter right away for a team. They also had two very good goalies on their affiliate list. Western Michigan commit Ben Blacker played for Team Ontario at the World U17 Challenge last year--and Ontario is usually loathe to select any player not committed to the OHL for that team. With Blacker having little left to prove in Ontario, if he made the move to the USHL, he could be a very good goalie, even if goalies that age traditionally struggle in the USHL. The other '97 goalie on their affiliate list is Wayzata HS goalie Vaughn Ahrens. Ahrens likely returns to high school hockey next season, but a team could end up with a solid starting goalie for two years down the road with him.