Nate Leaman's contract extension assures Providence of having one of the bright stars in the college coaching profession until at least 2021.

Leaman's contract extension keeps him in Providence until the 2021. The Friars have advanced to the Hockey East semifinals at the TD Garden in each of Leaman's first two years. Leaman came to Providence College from Union where he elevated that program tremendously.

"We believe we have the best coach in Hockey East. Hopefully with this new deal, Nate will be here for the rest of his career," Driscoll told a crowd of supporters at the grand reopening.

"Providence College is a special place and I am looking forward to working hard and building a championship program here," said Leaman in the school's release.

It was an exciting night for the Providence College Men's and Women's hockey programs as the school unveiled its renovations to the Schneider Arena.

Leaman's Friars are poised for another successful season after coming one game short of a Hockey East Regular Season Championship in 2012-13. "It burned at us all summer. I've been working the guys hard these first few weeks," said Leaman.

The Friars will be led by a terrific group of underclassmen headlined by sophomore goaltender Jon Gillies of South Portland, Maine. Gillies, drafted in the 2012 NHL Draft by the Calgary Flames, is the reigning Hockey East Goaltender of the Year and likely starter for the United States team at the World Junior Championships over the Christmas break. 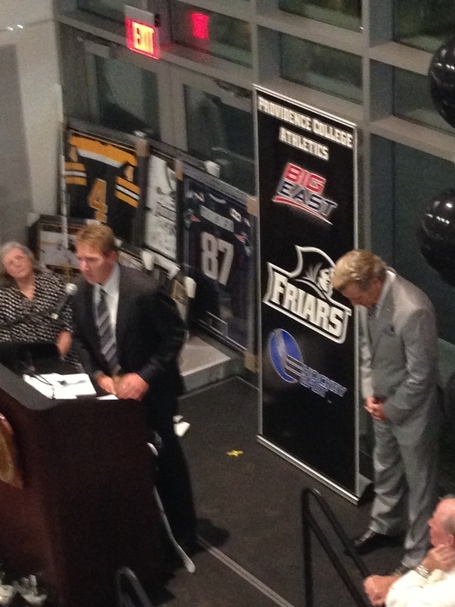