Freshman Austin Cangelosi has already made an impact for Boston College.

Chestnut Hill, Mass. - Austin Cangelosi and Kevin Hayes have been linemates for three games, or four if you count a preseason tune up against St. Francis Xavier (Nova Scotia).

But on Saturday night, when Boston College dismantled then No. 2 team in the country Wisconsin, Cangelosi and Hayes looked much more familiar than that.

Cangelosi tallied two goals - both assisted by Hayes - and returned the favor with an assist of his own to his center. The freshman looked calm and collected in front of a blaring crowd at the Conte Forum, and showed a lot of signs that have BC hopeful.

"It's great to get your first goal early in your freshman year," said Eagles head coach Jerry York. "It gives you confidence."

Playing with a guy the caliber of Hayes (a first round pick in 2010) Cangelosi will have plenty of opportunities to make plays. On his first goal, whether it truly did come off Hayes' stick or not, the senior forward still got Cangelosi the puck making a nice play from behind Wisconsin's goal. Cangelosi had all the time in the world one-on-one with Badgers goalie Landon Peterson, before roofing home a wrister.

"Johnny was working hard in the corner to give it to Kevin," said Cangelosi. "He found me in the slot and I was able to put it in."

Cangelosi's second of the day came only 50 seconds later. He and Hayes rushed up the ice in a 2-on-1, and Hayes managed to get the puck through the defender at the last second and onto the freshman's stick for an easy tap-in.

"It was definitely exciting, but I couldn't have done it without my linemates," said Cangelosi, who, despite the easiness of the goal, showed good awareness by not going below the icing line, even with seemingly no passing lane for Hayes.

The freshman certainly looked like a confident player throughout Boston College's drubbing of one of the top teams in the nation. On his assist, Cangelosi took a pass on the tape below the goal line, and in one fluid motion, spun, and fired a backhand, no-look feed to a streaking Hayes, who found the back of the net.

"No matter what the score is, if the play is open, I'm going to try to make the play," said Cangelosi, who has two assists in his three games. "It's a great feeling, and I'm really grateful I get to share it with my teammates."

If anything, Cangelosi's featured role on the Eagles top line is a vote of confidence from York, although the Eagles really have a 1a, and 1b when it comes to their groupings. (Gaudreau has been skating with Bill Arnold and freshman Adam Gilmour, but was on the ice for Cangelosi's first goal.)

"It's a good class," York said of his freshmen. "I'm more impressed with how they're fitting in." 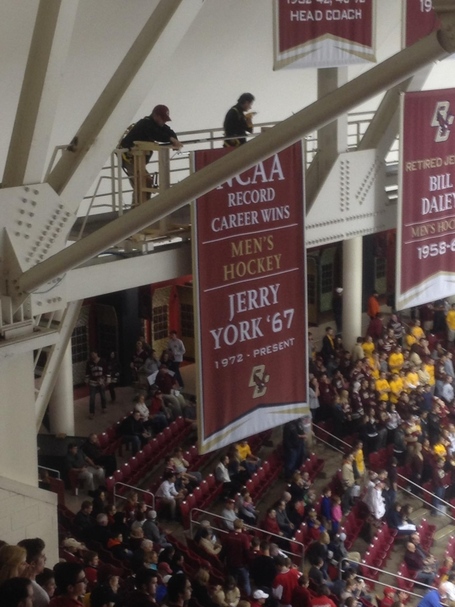