St. Lawrence University is hosting their annual Digital Identity Education Week this week, and the St. Lawrence women's hockey team is getting involved by hosting Social Media Night on Friday night when the Saints face-off against Princeton.

Digital Identity Education Week is described by the university thusly:

The weeklong event was created by Meg Bernier, assistant director of editorial services and social media, and Chris Wells, head coach for women’s ice hockey. The goal is to help inform students that what they do online becomes just as much a part of their personal identity as who as they are in person.

"College students have already created digital identities that can have both positive and negative effects on their reputations, their futures and others," Bernier said. "As more internship and job recruiters turn to these platforms to investigate candidates and applicants and as the job market’s need for people who can manage social media accounts increases, we have an obligation as an institution of higher education to make them aware of the implications their digital identities can have and how they can put their best digital footprint forward."

The week-long event featured talks for students on things such how to effectively used business-networking site LinkedIn, and password protection and avoiding identity theft.

On Thursday evening, ESPN personality John Buccigross gave a talk at the university on building an online presence, and somehow, crammed his way into this suit.

The event will culminate tonight with the St. Lawrence women playing in what is being called the 'Twitter Game'. The women will special jerseys with their Twitter handles on the back of the jersey: 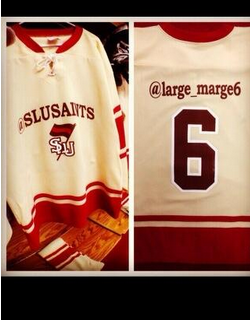 The team also printed up special line charts for tonight's game, with each player's Twitter handle listed. Players will also be named by their Twitter handles on the PA, so here's hoping @VanWilder23 or @mccraycray9 has a big game. Fans will also have the opportunity at numerous prizes for various social-media related things. A full listing of the giveaways is in a press release by the school here.