American International will be up against one of the best teams on home ice in the entire country.

American International will have its hands full this weekend as the Yellow Jackets venture north to face the University of Maine in a two-game series at Alfond Arena in Orono, but it's something the team has become accustomed to this year.

AIC has already had road games against Hockey East powers Providence and UMass-Lowell and a road trip to East Lansing to face Michigan State of the Big Ten for a pair. On the docket next month is a road game at Massachusetts.

"Obviously this is the most challenging nonconference schedule we've ever had. I hope in the big picture we can take something out of these games, learn from this, and become a more seasoned team. The pace is much quicker which will hopefully help in the stretch run. We obviously want to win, but we want to derive something from these games," said head coach Gary Wright.

Wright, in his 30th season behind the bench at AIC, knows what a challenge playing Maine in its barn will be for his team.

"It's a very difficult place to play with such an enthusiastic fan base. Obviously they are 7-1 at home this year."

Wright's team will be going up against a Maine team that is continuing to develop and progress under first year head coach Red Gendron.

"Maine is a fairly young and emerging team. They are well disciplined and well coached," said Wright, a former assistant at Maine under Jack Semler from 1979-1984.

American International, one of the least penalized teams in Atlantic Hockey, will have to stay disciplined and focused in order to have a chance to pull an upset in Orono this weekend.

"We're a pretty disciplined team, but we need to stay disciplined this weekend. We don't want to give them power play opportunities. We need to emphasize our play away from the puck and limit odd man chances.

AIC's defense ranks 12th in the AHA, but its offense is sixth in the conference. Wright's team did put up four goals against a stingy Providence defense earlier in the season.

"We need to be opportunistic and bury a higher percentage of our shots," said Wright.

American International will look to two of its veterans to pace the offense this weekend. Junior Alexander MacMillan has eight goals and six assists in 12 games while senior Jon Puskar has five goals and eight assists.

"Jon [Puskar] has always been among our leading scorers throughout his career here. He's got a big shot and has been a consistent goal scorer," said Wright of his senior from Grosse Ile, Mich. who has 36 career goals.

"Alexander [MacMillan] didn't play much as a freshman. Last year down the stretch is when he started playing more and emerging as a dangerous threat," said Wright. "He is big and effective on the power play," he added.

Freshman Carson Grolla has been one of the most solid defenseman at both ends of the ice for the Yellow Jackets this season. The Trail, British Columbia native has two goals and two assists.

"[Grolla] is a freshman. He's a point on one of our power plays. He's a really good young defenseman. He has a lot of poise for his age and being a freshman. He's a very good player and sees a lot of ice time. The fact that we're giving him that much responsibility is telling," said Wright, after his team's game against UMass-Lowell earlier this month.

American International has used all three goaltenders on its roster this season.

"As you can see we've used three goaltenders this year. Playing three obviously isn't ideal. We rode senior Ben Meisner last season, but he graduated. We're waiting for someone to emerge," said Wright of his goaltending situation.

"We haven't announced to our team who will start yet," said Wright. "We need our whole team to play better and our goaltending to play better," he added.

American International will head to Orono Thursday evening after practice. 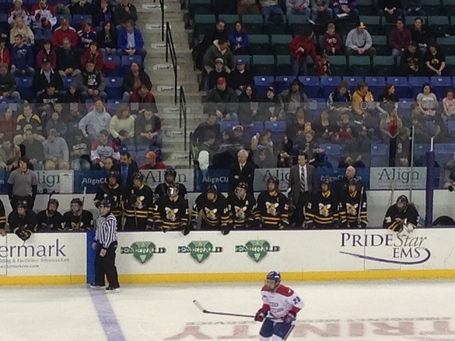