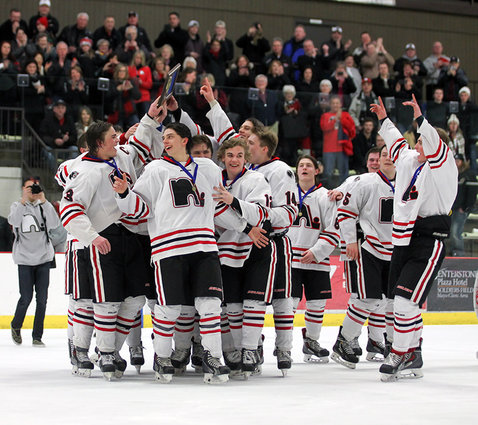 When you bring the state of Minnesota together for a hockey tournament, you expect greatest. That is exactly what we got during the 2015 Minnesota High School Hockey Tournament. The passion amongst the players, the coaches, and the fans, is an emotion that words cannot describe. Last week, sixteen Minnesota high school hockey teams (8 in Class A. 8 in Class AA), had then chance to make the dream of winning a state title, a reality. Winning a state championship in Minnesota is childhood dream amongst the hockey players in the state. In this journey, which many call "The Tourney," we get to see some of the best young players in the nation, competing and trying to lead their team to glory. Here’s my story.

Class AA kicked off Thursday with the quarterfinals. The quarterfinals for the top class in Minnesota started with a north vs. south matchup. The heavy favored and defending state champs, Edina Hornets, went to battle with the north boys from Bemidji. Edina took a 5-2 lead into the third but Bemidji never stopped fighting, they scored two late goals making it 5-4 with a few minutes to play. Edina eventually won 6-4 with an empty-netter but in the process they suffered a huge loss. Their leading scorer and D1 commit to the University of Notre Dame, Dylan Malmquist, got hit with a shot in the back of his knee, causing him to leave the game. He ended up missing the semifinal game too for the Hornets, due to the injury. Edina was on to the next round, but it would be without their star Malmquist.

Many people thought that the Duluth East Greyhounds did not belong in this tournament but when they stepped on the ice Thursday afternoon, against St. Thomas Academy, they started proving people wrong. The Cadets took a 5-2 lead into the third but the dawgs from Duluth were still fighting. Scoring three goals in the third to force the game into overtime. The hounds completed the huge upset with a tip in goal from Ryan Peterson, proving to hockey fans throughout the state that they belong in this tourney.

Into the night we saw Lakeville North, a team consisting of six Division-One commits. Coming in, Lakeville was the number one seed and a perfect 28-0-0. Their pursuit for perfection start with their quarterfinal matchup against Hill-Murray. Although Hill-Murray had some talent themselves, the Poehling brothers, who are all heading to St. Cloud State University, and the rest of the Lakeville North Panthers were too much. The Poehling brothers finished with 4 points, including two spectacular goals from Jack Poehling (The goal of the tournament in my opinion). Their 4-1 victory over Hill-Murray pushed the Panthers into the semifinals.

The last matchup on Thursday consisted of two very evenly matched teams. A matchup of the #4 seeded Blaine and the #5 seeded Eden Prairie. Eden Prairie might have on of the brightest young stars in country in, Casey Mittelstadt. Only a sophomore but already committed to the University of Minnesota, Mittelstadt had a great game against Blaine. Himself along with Michael Graham, who is committed the University of Minnesota-Duluth, both buried two goals in the Eagles 5-3 victory over the Blaine Bengals.

Just like that, one day into the tournament, the field was cut in half. Now only 4 teams had the chance of winning a state championship. With the semifinals set, the state of hockey was in-store for some great hockey on Friday.

Semifinal Friday for Class AA saw the largest crowd the Xcel Energy Center has ever seen. The arena was packed, 21,609 people, all to watch high school hockey, four teams battling to see who was worthy of a spot in the Class AA Championship Game.

With Malmquist out, Edina was looking for their role players and their other two D1 commits, Garrett Wait and Henry Bowbly, to step up. The Hounds with nothing to lose went out and played their best game they have played all year. Many considered Duluth East a heavy underdog to powerhouse Edina, but the Hounds’ head coach Mike Randolph, had no doubt in his mind that his group of kids could beat the Hornets. In my opinion, Randolph is the best hockey coach in the state of Minnesota. He implements a system that his kids believe in and makes them believe that they are the best team in the state, even when they don’t have as much talent as the other top teams. By holding Wait and Bowbly to 0 points, and having 3 goals from 3 different players, Duluth East was able to pull off the upset over Edina. The Cinderella story of the Duluth East Greyhounds was heading to the Class AA State Championship Game.

Looking for win number 30, Lakeville North took on Eden Prairie for the last spot in the title game. This was game that had eight division one commits, six from Lakeville and two from Eden Prairie. Although the Poehling brothers had a great game, tallying 6 points, junior Max Johnson scored the game-winning goal for the Panthers. Johnson’s impact on the game helped out tremendously, with sophomore Ryan Poehling with feeling under the weather. What made Lakeville so dangerous was their depth. They had their big guns that always played well but their role players were always there when the team needed them the most. Lakeville went on to win 6-2 and became just one game away from completing their perfect season.

Saturday night, the battle for a State Championship begins. The Lakeville North Panthers were trying to do something that hadn’t been done since the 1994, complete a perfect season. The only thing standing in their way was determined dawgs from Duluth East. It was battle between the Altmann brothers from Duluth East and the Poehling brothers from Lakeville North. With Ryan Poehling still pretty sick, he was a game-time decision. But when he step on to that ice of the State Championship game, the sickness was unnoticeable, as he scored the first goal to put the Panthers up 1-0. The Panthers had a 3-0 lead in the third when Ryan Peterson netted a power play goal for the Hounds to make it 3-1. At that point in time everyone thought to themselves, "do these kids from Duluth have another comeback in them?" They pushed and pushed but with Nick Poehling added an empty-netter, and the Lakeville North Panthers, completed their pursuit to perfection, with a 4-1 victory over Duluth East! The Poehling brothers combined to finish with 8 points in the game. The excitement of the Lakeville team was like a team that just won the Stanley Cup. Some of these kids will go onto do great things but the memories they made during this state tournament will last a lifetime.

Another Minnesota State High School Hockey Tournament in the books, and man did we see some great hockey. I am already counting down the days until next season.