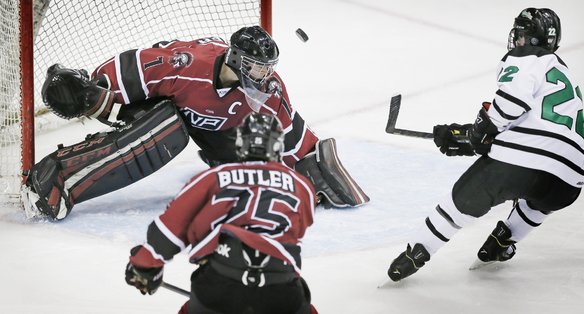 When you bring the state of Minnesota together for a hockey tournament, you expect greatest. That is exactly what we got during the 2015 Minnesota High School Hockey Tournament. The passion amongst the players, the coaches, and the fans, is an emotion that words can not describe. Last week, sixteen Minnesota high school hockey teams (8 in Class A. 8 in Class AA), had then chance to make the dream of winning a state title, a reality. Winning a state championship in Minnesota is childhood dream amongst many hockey players in the state. And in this journey, which many call "The Tourney," we get to see some of the best young players in the nation, competing and try to lead their team to glory. Here’s my story.

Class A quarterfinals took over the Xcel Energy Center on Wednesday. In the first quarterfinal matchup we saw a junior from Mahtomedi, Jack Becker show off some of his incredible talent that has him offers to play college hockey for Harvard and Michigan Tech. Becker finished the game with a hat-trick and his Mahtomedi team advanced to the semifinals with a 6-3 win over New Ulm.

Next on the ice was the defending state champs, the East Grand Forks Green Wave, who took on a New Prague team, that was making its’ second straight state tournament appearance. New Prague played a great game but the talent of EGF was too much for them. In third period, Dixon Bowen, in my opinion the best player in Class A, took over the game. He finished with 2 goals and an assist, as the Green Wave won 4-0, advancing to take on the Mahtomedi Zephyrs in the semifinals.

The evening session of the Class A quarterfinals consisted of Hermantown, who had finish 2nd in the state tournament the past five years, took on Spring Lake Park, who was making their first ever state tournament appearance this year. The experienced Hermantown Hawks, showed why they were the number one seed coming into the tournament. Hermantown won easily 8-0 with the help from their star forwards, Nate Pionk and Ryan Kero, who both finished with 3 goals and 3 assists.

The day wouldn’t end without us seeing an upset. In the last game of the night, the fifth seed, St. Cloud Apollo Eagles had a defensive battle with the fourth seeded Breck. The game went into overtime still tied at zero behind great performances from both goaltenders, Nick Althaus (25 saves) and Stephen Headrick (13 saves). The Apollo Eagles game came out on top with a beautiful feed from Gino Lucia, nephew of Don Lucia, to Brandon Bissett, who buried the game-winning goal to complete the Eagles’ upset.

Now only 4 teams had the chance of winning a state championship. With the semifinals set, the state of hockey was in-store for some great hockey on Friday.

With the field cut in half, semifinal Friday saw Class A return to action with Mahtomedi taking on East Grand Forks. A game that many thought would be a battle between stars, Becker for Mahtomedi and Bowen for East Grand Forks, but an unsung hero stole the show. Although Becker and Bowen each had points, Grant Loven from EGF was the difference-maker. Loven buried three goals in the 5-2 victory for the Green Wave. EGF was heading back to the state title game to try to defend their championship from last year, now it was just matter of who they were going to play.

Semifinal number two was defensive minded Apollo, trying to slow down the high-powered offensive of Hermantown. The Eagles from Apollo were able to hold Hermantown in check, until Peter Hawk dished a long cross-ice passed to Jesse Jacques, who released a cannon of a shot, beating Apollo's goaltender, Nick Althaus. Maybe one of the surprises of the tournament, St. Cloud Apollo, was a well rounded team, that showed great discipline in the D-zone. The Hawks prevailed and were heading back to the state championship game for the 6th year in a row and set up a rematch of last year’s title game, that EGF won 7-3.

The defending champs vs. the team that has been here for 6th straight years, who was going to take home the trophy and make their dream of becoming a State Champion a reality? It was a battle of two northern teams. We expected a physical, hard fought game and that exactly what we got. East Grand got off to an early 2-0 lead but Hermantown came right back with two goals of their own early in the second period. EGF scored a big goal late in the second and added another early in the third to regain their two-goal lead. But just when you thought it was over Hermantown scored two goals in the final minute to send the State Championship game into overtime! More hockey, just what the hockey fans in Minnesota wanted. In OT both teams had chances but a little over three minutes in, EGF had an offensive-zone face-off that resulted in Dixon Bowen pushing the puck forward, Reed Corbid winning the race to it and sliding it to the front of the net, where Tanner Tweten put a wrist shot past the Hermantown goaltender. The helemts, gloves and sticks went flying into the air, as East Grand Forks were State Champions for the second straight year!

Congrats to the East Grand Forks Green Wave and their unbelievable journey to the tourney and capping it off with an overtime win, it is something that these kids will never forget.

We saw some great hockey this week in Minnesota and I am already counting down the days until next years’ tournament!