As I write this, the countdown to this year’s Hobey Baker Award ceremony is at 17 days, 7 hours. In a little over two weeks, the most coveted award in collegiate hockey will be given to "the top NCAA men’s ice hockey player in the nation." The obvious front-runner, Boston University freshman and national top scorer (24-42-66) Jack Eichel, was this morning beaten out for the Walter Brown Award by Harvard junior forward Jimmy Vesey, which from a cursory look at Twitter is causing a bit of a stir. The Walter Brown Award is somewhat of a regional Hobey, honoring New England’s best American-born Division I player. A bit of confusion is understandable here – how does the guy who leads the country (let alone New England) in points, assists, points per game, power play points, and plus-minus, not qualify as the best? Since all we can do for the next 17 days is watch, wait, and speculate, I decided to do some math to pass the time.

First up, overall point share. If you want to read up on the math behind point share, Hockey-Reference.com has a very in-depth article on it, but basically, this is the way it works. Following an NHL-style system, where a win is worth 2 points, a tie is worth 1, and a loss is worth 0, each team has a certain number of total standings points they’ve won that season. The point share stat attempts to quantify how many of those points were the direct contribution of a single player – using Eichel as an example, BU’s record of 25-7-5 is good for 55 standings points, and after calculating point share we can guesstimate that BU can credit a little under 9.5 of those points directly to Eichel.

So following the Hockey-Reference method (using games played rather than TOI, which sadly isn’t kept at the NCAA level), I calculated overall point share for each of the 9 skaters up for the Hobey Baker. For the purposes of this whatever-this-is, I didn’t include North Dakota goaltender Zane McIntyre – reason being that point share tends to be a lot higher for goalies. That absolutely makes sense because the quality of goaltending can make or break a game and a season, disproportionately so compared to the other two positions (see: Andrew "the Hamburglar" Hammond and the Sens). But I wanted to compare apples to apples, and particularly the Jack Eichel apple to the Jimmy Vesey apple, so I left McIntyre out. Rest assured he is a very good goalie with very good numbers and I hope I never have to see him play my team.

Back to overall point share. Seems pretty cut-and-dry here, with Eichel adding an extra half standings point over Vesey, and both of them a good ways above the rest of the pack. As we would expect from someone who leads the nation in most of the scoring categories, Eichel produced a lot of points for his team – enough that without those extra 9.4 points, BU would drop from their 7-point cushion atop Hockey East to fourth in the conference behind UMass Lowell, the University of Vermont, and Providence College. But Vesey had an equal impact, four spots, on Harvard’s place in the rankings – without his extra 9 points, they drop from third in the ECAC (45pts) to seventh (36pts), above only teams that didn’t break 30. If you’re still with my questionable numbers and even more questionable writing, you probably picked up that BU finished the season a full 10 standings points above Harvard (55 vs. 45). So while Eichel leads the overall point share race, looking at it as a proportion of total team points paints a different picture:

Here we see just how important Jimmy Vesey has been to the Harvard team this season – nearly 20% of their standings points came directly from him. Just for some perspective, Alex Ovechkin, who is about to hit 50 goals while the second-place goal scorers on the Caps meander towards 20, currently has a (38-game adjusted) share of 13% of his team’s points. The only NHL player to break 19% of their team’s point share is New Jersey’s Cory Schneider, who would likely be at least under consideration for the Vezina (.928 SV%, 2.17 GAA) if his team weren’t weighing him down like a lead anchor.

Which brings us to The Price vs. Dubnyk Question, which is a nice metaphor for Eichel vs. Vesey. Unless you’ve been under a rock, you’ve at least heard rumblings about Carey Price making a solid case to win this year’s Hart Trophy as the NHL’s Most Valuable Player. Price is having a killer season to be sure, and is from the standpoint of purely objective numbers (1.86 GAA, .938 SV%) the best goalie in the league this season. However, the award is to be given to "the player judged to be most valuable to his team," which raises the question of what is more valuable: being the best player overall while playing on a solid team, or being the best player on a team that would be dead in the water without you? No question that Price is the best overall, but Devan Dubnyk has dragged the flaming wreckage of the Wild’s season to safety by himself. 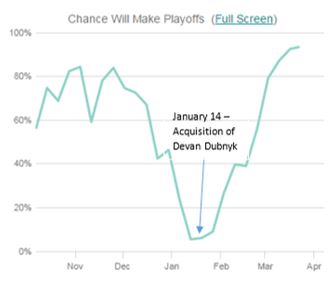 I am not disputing that Jack Eichel is, both on the basis of pure statistics and as anybody who has seen him in the flesh can attest, a generational talent on a whole other level. Without him, Boston University is a much lesser team, I think we can all agree. But while a BU team without Eichel is mediocre at best, a Harvard team without Vesey is a wet match in a dark cave. 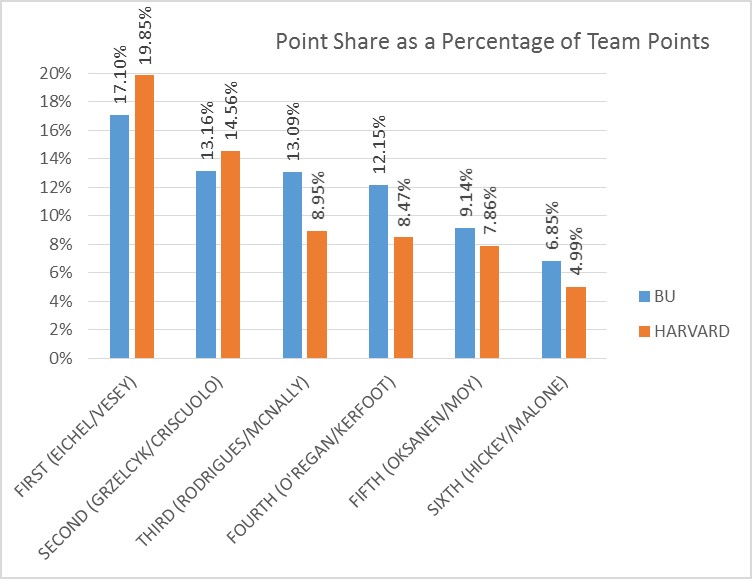 Clearly, both teams lean on their Hobey men disproportionately, which makes sense considering that we are debating which one is the best in the entire country. But after Eichel, BU has 3 other players doing some relatively heavy lifting on point share, in Matt Grzelcyk, Evan Rodrigues, and Danny O’Regan. Meanwhile, after Vesey and his linemate/frequent assistee-and-assistor (which I’ll talk about in a second) Kyle Criscuolo, Harvard experiences a pretty notable drop-off in point-share-proportion. To put it another way, Harvard seems to lean on Jimmy Vesey a lot more than BU leans on Jack Eichel, as improbable as that may seem.

The next logical argument would be that of course BU has more (and more evenly-distributed) secondary scoring as they are playing with a kid who leads the country in assists, while Vesey’s Harvard teammates are playing with a kid who leads the country in goals. Following that reasoning, one could expect that Eichel’s teammates would owe more of their total point share to him than Vesey’s do likewise. And I’m pretty sure you’d be right. It’s difficult to calculate point shares in the absence of a player like Eichel or Vesey, because they are so central to their team’s offense that it’s tough not to descend into an "It’s A Wonderful Life"-esque scenario and to accurately assess what each of their teammates’ stats –particularly plus/minus, among others- would be were those two not playing. However, since one of the components of offensive point share is goals created, which involves (among other things) goals being weighted as twice as important as assists, it would follow that removing goals from a player (as would happen more with Eichel’s BU teammates – the beneficiaries of his 42 assists) would have a bigger impact on that player’s point share than removing assists (on Vesey’s 31 goals). While I am not confident in my calculations of point shares in the absence of Eichel and Vesey, one passable way to quantify each player’s impact on their teammates is to look at what proportion of those teammates’ points scored directly involved Eichel or Vesey. I tallied up how many of each player’s points were either a) goals on which the Hobey candidate assisted, b) assists on the candidate’s goals, or c) goals by a third teammate on which both the player and the candidate co-assisted.

These numbers pretty much speak for themselves – Harvard’s second-in-command scored over ¾ of his points in situations directly involving Jimmy Vesey. To reiterate what I said earlier re: wet match, dark cave – without Eichel, BU are in pretty bad shape. But without Vesey, Harvard is a complete shambles. So we circle back to the question of value. What is more valuable – sheer numbers or numbers relative to your team? Or do numbers even matter? I’m a Rangers fan – we pay Tanner Glass $483,333 per assist. If there’s anything Glen Sather has taught me it’s the importance of intangibles. Anybody who’s seen Jack Eichel play live knows to believe the hype, and it’s impossible to say how his teammates would be doing this season without him – both for his contributions on the ice and how his arrival has rejuvenated the spirit of a BU hockey community rocked by scandal and sub-par performance. Presumably they’d be doing pretty poorly. The $483,333 question, I suppose, is if they’d be worse off than Harvard would be without Jimmy Vesey. In my completely unqualified opinion that’s what the Hobey Baker selection process is going to come down to – both teams would suck in their candidate’s absence, but which would suck more?

If that last paragraph sounded like a giant hedge, that’s because it kind of was. I’m not trying to convince anyone of anything – I know who I want to win, I know who I think should win, I know who I think will win, and they’re not all the same person. My sole goal in writing this is to point out that there exists a very legitimate argument in favor of Jimmy Vesey. Like everything else in life, it depends on how you look at it – but if he took home the Hobey, it would not be the most shocked I’ve ever been.