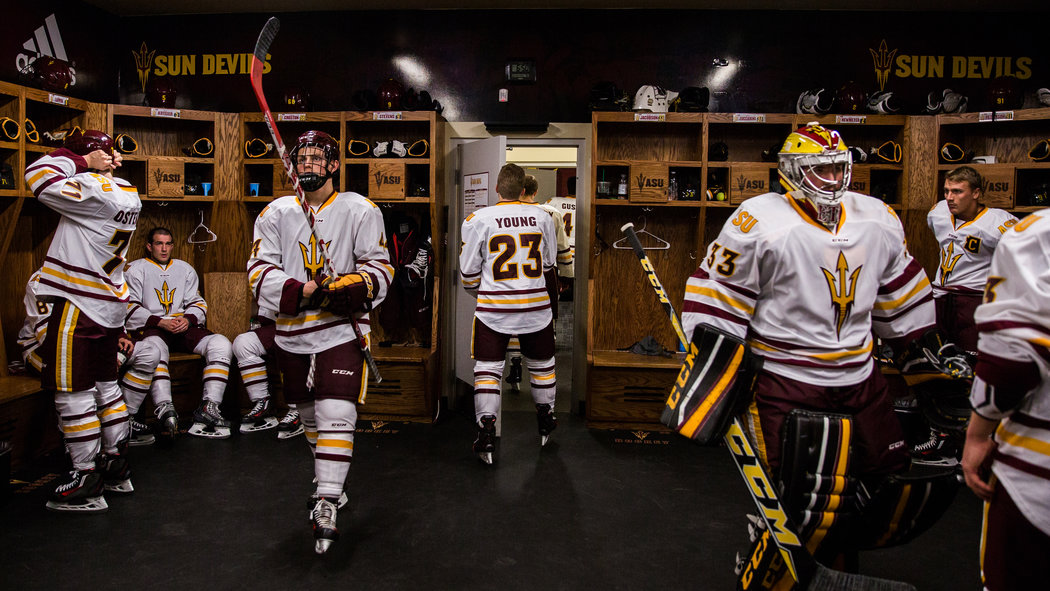 Arizona State began their play in Division 1 NCAA hockey this season. They have begun the season playing against a mixture a mixture of D1 and ACHA competition then a full D1 schedule in 2016. Along with that schedule, the Sun Devils and the Arizona Coyotes announced a new arena partnership that would allow the Arizona State to play four games at Glendale's Gila River Arena. When not playing at Gila River Arena the Sun Devils play at Oceanside Ice Arena in Tempe.

Arizona State is the second team since the 2012-13 season to join the NCAA ranks. The Penn State Nittany Lions were the last team to join the NCAA after Buffalo Sabres owner Terry Pegula donated $102 million to build an arena on campus and create a Division 1 hockey program. Unfortunately for Arizona State, they have not gotten a donation like that and don't have a rink on campus. With the Sun Devils joining NCAA hockey, it got me thinking who could be next? Here is what I have put together:

The Big Ten currently has six teams within their conference. That includes Minnesota, Wisconsin, Michigan, Michigan State, Ohio State and Penn State. There are two or three teams that could potentially make the jump to Division 1.

Illinois has a rink on their campus. It is an Olympic size rink. Along with that, they currently have a D1 ACHA team. Champaign, Illinois is just over a two-hour drive from downtown Chicago, where the Chicago Blackhawks have taken over the sports landscape winning three of the last five Stanley Cups. The Illini have been rumored in the last few years to be making the jump to varsity level but nothing has come from any of the rumors.

When Penn State was making the jump from club to varsity level a rumor surfaced about the Nebraska Cornhuskers creating a Division 1 hockey program. The rumor was that the team would play at the $179 million Pinnacle Bank Arena, home to the Huskers' men's and women's basketball teams. Seating about 15,000 people, it can support ice. Since then, there hasn't been any more rumors.

Obviously when you think of the Pac-12, you don't think of hockey. Bare with me here. Arizona State is the first program in the Pac-12 to have a hockey team. The first team they played against as an NCAA program was University of Arizona, an ACHA D1 program. Schools like USC and UCLA also have ACHA teams. In the middle of Los Angeles, a partnership with the L.A. Kings could workout. Hockey is a growing sport in California, maybe a team like Cal could join as well. With the Pac-12 Network, they could take after the Big Ten in creating a hockey conference.

Obviously all of this is contingent on money, donations, Title IX and things like that, but it can happen. It will be interesting to see how Arizona State ends up doing when they begin their full D1 schedule. Penn State has exceeded expectations when it comes to fan support. Hopefully Arizona State can follow suit and maybe some day we will see a Pac-12 hockey conference.