With the rest of the world watching, USA Hockey develops its craft

In the past decade, both the pedigree and size of USA Hockey have grown dramatically.

Share All sharing options for: With the rest of the world watching, USA Hockey develops its craft

BOSTON -- It was 2002, and Ryan Suter and Zach Parise were teammates on the Men's National Under-18 Team at the IIHF Men's Under-18 World Championship.

Their coach was Mike Eaves, a man who would bring Suter with him to the University of Wisconsin a year later. But on that day in Slovakia, the three men were representing their country, and needed a two-goal margin of victory in the tournament's final game over Russia to win gold.

"Ryan Suter assisted on the goal by Zach Parise, and we ended up winning the game 3-1, and thus won the tournament," Eaves said. "We're standing on the blue line, and we were in Slovakia. There were a lot of Russian people there, and as they were playing the National Anthem, they whistled instead of booed."

Eaves said his players suddenly locked arms, and began singing the National Anthem. By the end of the song, he said, all one could hear in the rink was the sound of his players.

"At that moment, there was a great pride that connected those young men, and the country they represented in winning that tournament," he said.

It's been 12 years since that team won gold, and Suter and Parise are now teammates in Minnesota, and competed together on the 2014 men's Olympic team that placed fourth in Sochi. In that time though, USA Hockey has seen tremendous growth, from its youth programs all the way up to the pros.

"USA Hockey is in a great place right now," said Suter in an interview with SB Nation before the Olympics. "In the past probably five, six years they have had great success at World Juniors. Even the membership of USA hockey is growing."

It's something Eaves has also noticed from his post at Wisconsin, as collegiate hockey has grown tremendously in both size and skill.

"You can take a look at pro hockey and where it is getting its players from," Eaves said. "It kind of breaks down to thirds: a third of the players that get to the NHL come from major junior hockey, a third come from Europe, and a third come from college ranks.

"So if you have aspirations of pursuing a pro career as young hockey player, and you would like to give yourself the opportunity to get an education at the same time so if things don't work out, or you have an injury, it kind of gives you a safety net to fall back on."

One player currently on that professional trajectory is Matt Grzelcyk. A rising junior defenseman at Boston University, Grzelcyk was drafted by the Boston Bruins before his freshman season for the Terriers. He's participated on both the NTDP team based in Michigan and more recently the World Junior team this past year in Malmo, Sweden.

"It's huge. It's definitely the biggest honor I've had in my life so far," Grzelcyk said of his role in USA Hockey. "Going there in Ann Arbor definitely changed my life for the better. I needed to put on a lot of pounds and get in a lot of training."

Of course, the program has still gone since 1980's "Miracle" team without claiming the most prestigious prize at the senior level: a gold medal. There were close calls, like the 2010 silver medal team chock full of former collegiates, like Suter, Parise, Chris Drury, Ryan Miller, and the list goes on.

But to make that final jump, to enter the conversation with Canada, it seems like there's one more step to take.

"When I was younger, it was kind of all about Canada," said Grzelcyk, a 20-year-old. "It seems like [the United States] has made strides every year, and it seems like every tournament, no matter what tournament, the US is always going for gold, and that's the mindset they have."

That next step may already be underway, as Eaves pointed to some of the youth programs currently being implemented nation-wide that could assist in improving player development.

"What USA Hockey has tried to do is get back to some of the grassroots of the skills of the game of hockey." -Mike Eaves, University of Wisconsin head coach

"They're doing it right now. There's a program called ADM," said Eaves. "What USA Hockey has tried to do is get back to some of the grassroots of the skills of the game of hockey."

ADM, or the American Development Model, focuses on player retention, and putting an emphasis on performance rather than results, according to USA Hockey's website.

"It's a slow process, but they're doing cross-ice games, and trying to utilize the ice better for our youth in America," said Eaves. "They're trying to teach them more fundamentals on a broader scale." 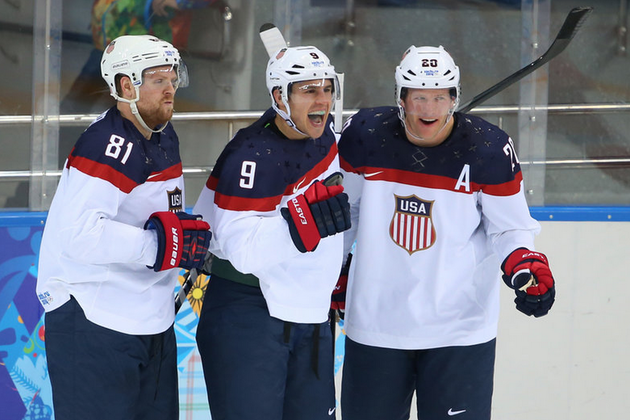 It's the technical aspects of the game that could put a new generation of youth hockey players into that upper echelon of international talent. When the United States was bounced in the semifinals of the 2014 Olympics by Canada, the Americans were clearly outclassed. The blue collar approach, while sufficient in the qualification round against countries like Slovakia and Slovenia produced zero goals in the team's final two contests again Finland and Canada.

The team that silvered in 2010 at Hockey Place in British Columbia was more of a surprise, not the expectation. When Patrick Kane proclaimed it was "gold or bust" heading into the 2014 tournament, the Americans were overmatched by an all-around better Canadian team.

For the United States, the goal now is to develop a new generation of players with the fine-tuned skills and all-around prowess to reach the pinnacle of the international game. Programs like ADM, according to Eaves, might be the first step in that direction.