Maine advances to play Providence in the Hockey East quarterfinals.

Orono, Maine -- What a difference a week makes. A game after being pulled halfway through senior night for allowing three goals on 20 shots, Maine senior Martin Ouellette rebounded to stop all 29 shots he faced as the Black Bears skated past Merrimack, 2-0, in a Hockey East playoff game at Alfond Arena.

"Tonight was a complete game. All of our guys were on board. All four lines were going, and obviously goaltending was there. That was huge, especially to build some confidence going into next weekend," said Maine senior Mark Anthoine.

Anthoine gave the Black Bears all the scoring they would need just 2:01 into the game. Skating on a new line with Steven Swavely and Andrew Cerretani, the trio was able to force a turnover with a tenacious forecheck.

Cerretani took the initial shot that was blocked from high in zone, but it was blocked in the high slot. Swavely took a swipe at it, and the puck ended up on Anthoine's stick for the backhander that beat Merrimack goaltender Rasmus Tirronen high on the glove side.

"It was dumped in. We did our standard forecheck. I knocked the puck out of there right winger. Cerretani was up high and had the poise to get the puck on net. It hit Steve's skate and kicked to my skate," said Anthoine of the game-winning tally.

Merrimack had three power play opportunities to close out the first period, and although the Warriors moved the puck well, they were unable to cash in on any of their chances. In large part due to the three power play chances, Merrimack out shot Maine, 13-9, in the opening period.

Maine took over in the second period, getting back to its style of play and forcing the play to Merrimack. The Black Bears had the edge in shots, 12-4, in the second frame.

"We played really well. We hemmed them in. We could have scored and could have put the game away," said Maine head coach Red Gendron.

The story of the third period was the stellar goaltending of Ouellette. The Columbus Blue Jackets prospect made two really nice glove saves midway through the stanza and came up large in the final minute.

Devin Shore made an uncharacteristic turnover that led to Merrimack freshman Hampus Gustafsson skating in alone on net, but Ouellette came out and cut the angle down to force a shot right into his midsection.

"Shore didn't see that guy coming and I don't know how many times he said thanks after the game," joked Ouellette of Shore's giveaway that led to the chance. "I was able to come out. I got it right in the chest and was able to cover it," said Ouellette, who recorded his fourth shutout of the season Saturday night.

"I'm sure Hampus would like that one back. That mark won't be too tough to get off the Maine crest. It hit [Ouellette] right in the belly. I think Hampus was surprised to get it. He made a great play, a good reach, but I'm confident in the future Hampus will put that in the net," said Merrimack head coach Mark Dennehy.

Shore attained for his error shortly thereafter by out racing Merrimack defenseman Jordan Heywood to beat out an icing and tap the puck into an open net to seal the victory.

"That goal by Devin Shore pretty much sums up how he is as a player. He completely, flat-out, beat [Heywood]. He didn't have to get there, but he did. It was awesome to see that," said Anthoine.

Despite taking the loss, Tirronen was spectacular in net for Merrimack. The Espoo, Finland native stopped 33 of the 34 shots he faced, including several that were highlight material.

"Both [goaltenders] made saves on pucks that should have gone into the net," said Dennehy.

"Tirronen was very, very good tonight. He made a ton of good saves. That's the best I've seen that young man play," said Gendron. "We had a lot of great chances, especially in the second, and he stood tall."

The loss ends the season for Merrimack, a team that finished lower than sixth in the Hockey East standings for the first time in five seasons.

"That summed up [our season]. We finished how we started, but our power play was a lot better in our 33rd game than it was in our first," said Dennehy.

Maine will travel to face Providence in next weekend's Hockey East Quarterfinals. The Friars swept Maine in Orono just last weekend to close out the regular season. 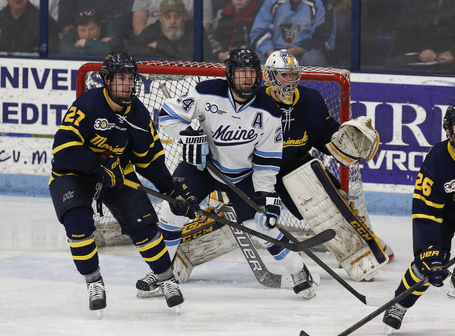