Our countdown of the NCAA's top 100 NHL prospects continues with players ranked 21-40 with the first free agent prospect making the list.

This is the second installment of this series focusing on players ranked 21-40. You can find the first installment here. 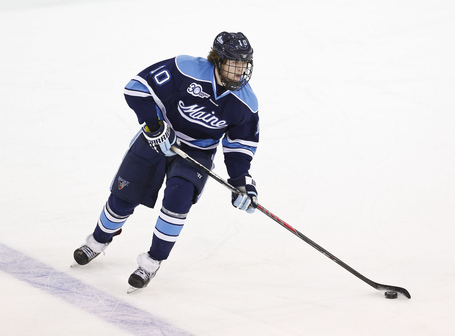 Hutton is clearly the horse of the Maine blue line and has often times spent the entire two minutes on the ice during a penalty kill. He has good vision and has the ability to be a one-man breakout. His ability in the offensive end is also something that will help in his quest to make it to the NHL. He has a good shot and is poised with the puck as the quarterback of Maine's top power play unit.

The best thing that could be said about a stay-at-home defenseman is that he is rarely noticeable on the ice. That was always the case with the Tarrytown, NJ native, as he rarely ever made mistakes and just went about his business in his own end. Over the past few months he is elevated his game and taken on more responsibilities, especially with offensive defenseman Trevor van Riemsdyk out with an injury. He has also become stronger and is very hard to move off the puck. His team mates and coaching staff have been highly complimentary of the sophomore.

The first half of Draeger's season was hampered by leg injury, but since returning to the Spartan line-up midway through the season, Draeger has been solid, and played big minutes for Tom Anastos' squad. Draeger has improved his skating since coming to Michigan State and plays an impressive two-way game. 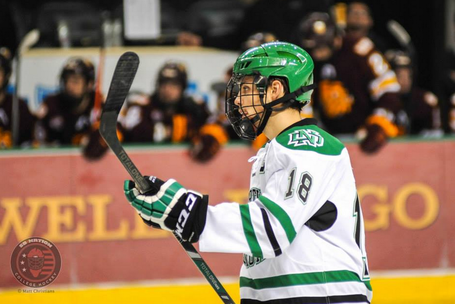 Simpson first came to North Dakota as a 17-year-old, and as a result, got a bit lost in the shuffle as he adjusted to playing against much older competition. But over the course of his career, he’s quietly become one of the most effective two-way defensemen in the NCAA, capable of playing in every situation. He’s got excellent hockey sense which should help lead him to a long NHL career. 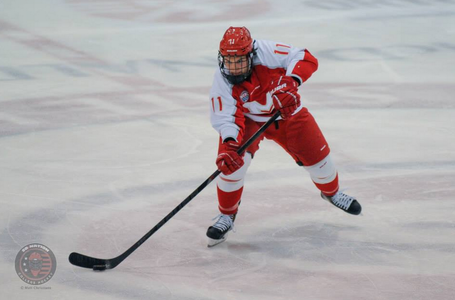 Barber is one of the most lethal scoring threats in the NCAA this year. His offensive instincts and heavy shot with quick release make him a threat to score any time he is in the offensive zone. He captained the 2014 US World Junior team, and had a solid World Juniors for the second year in a row.

Dzingel does a little bit of everything for Ohio State. A year after posting a more-than-respectable 38 points in 40 games, Dzingel looks poised to blow past that mark this year as his team’s leading scorer. He’s also a defensive terror on the ice while playing the center position, and plays with a grittiness that would allow him to play any role at the pro level. 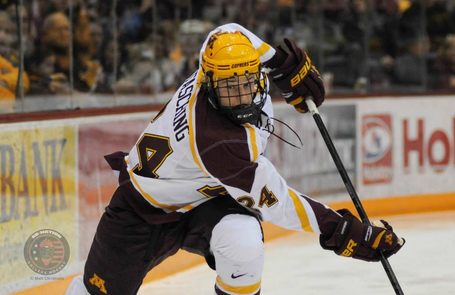 A rough draft year dropped Fasching to the fourth round of last year’s NHL Draft, but returning home to Minnesota has done wonders for Fasching’s confidence. Despite his young age, he’s been a beast in front of the net on the Minnesota power play, and wowed many with an impressive performance at the World Juniors, where he played a big role on Team USA’s energy line.

The Commerce, Mich. native is a big goaltender that takes up a lot of the net. He is good on his angles and squares up to shooters so he very rarely makes a flashy save as he's already in position. He has a good glove and has quick feet. There has been much debate over whether it's the system or the goaltenders at UMass Lowell as his backup Doug Carr also has extremely good numbers. The answer is probably a little of both, but Hellebuyck more than passes the eye test. 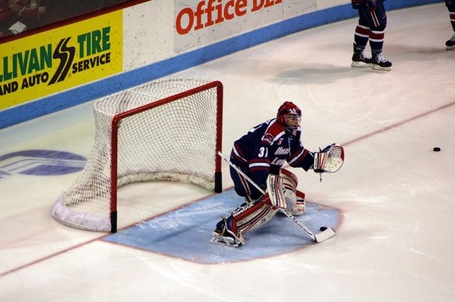 Another freshman gem on the Eagles' blue line, Santini plays a physical brand of hockey, combined with a bigger frame that will give him a good shot to play at the next level. The Devils prospect fits the mold of New Jersey’s system pretty well, although his offensive game is really what he needs to work on. He's also the same height as a former Devils' defensive great, although we'll hold off on any Scott Stevens comparisons for now.

The USNTDP product has had to overcome several serious injuries since his arrival in Burlington, but he saved his best for last in his senior campaign. The Collegeville, Pa. native is a power forward that can play both ends of the ice at the next level. He's very strong on the puck, has a good shot and has deceptively good hands. He has two shorthanded goals and has been very effective in his own end killing penalties and taking care of defensive responsibilities.

Kuraly isn’t as exciting offensively as teammates Riley Barber and Austin Czarnik, but everything about his game screams ‘future pro’. He’s a big, grinding winger who uses his size effectively on both ends of the ice. His offensive upside is a bit limited, but he’ll be a solid second or third line winger for many years to come.

The RPI sophomore is a big-bodied winger that has the potential to be a great bottom six forward at the NHL level. He is very strong along the wall, brings a physical presence to the ice and can really muck it up and grind it. He's scored eight goals this season, including two on the penalty kill, but he has the potential to make a living as a third or fourth line winger in the pros.

Nate Leaman has often talked about how the former Stanstead College (prep) star is much younger than some of the defensemen he's going up against in Hockey East. That is certainly true, but Jankowski needs to become more of a threat in the dirty areas if he is going to become truly successful at the next level. He showed signs of that early in the season and is certainly driving the net harder than he did a year ago. He should stay at least another season in the NCAA before moving on to the next level. 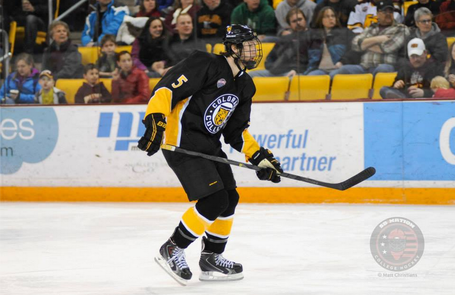 Slavin was a player that flew under the radar playing on a bad junior team in the USHL, and a struggling Colorado College program, but he opened a lot of eyes by practically forcing his way onto the 2014 US World Junior team with an outstanding camp and a great tournament in Sweden. Slavin skates well and is an outstanding passer. He has tremendous upside as an offensive defenseman. 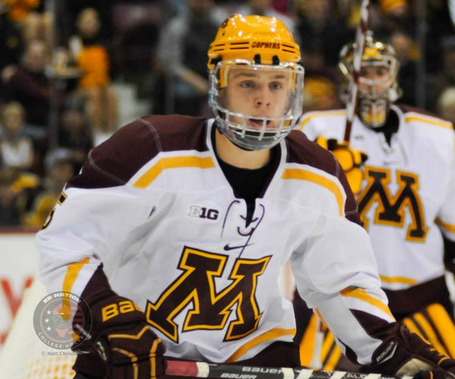 Reilly is a smaller defender, but a beautiful skater that is excellent at rushing the puck up the ice and making plays happen in the offensive zone. He's made tremendous strides forward in his sophomore campaign with Minnesota in terms of picking his spots to join the rush better and becoming more reliable in the defensive zone.

The Latvian offensive prodigy has taken advantage of the benefits of NCAA hockey by becoming physically stronger and better along the boards and in the defensive zone in his second year of NCAA hockey. He hasn’t quite reached his full potential as a scorer yet, but could get there with another year to add some more muscle to his slender frame. Blueger is also exceptional in the face-off circle, which increases his value as a centerman. 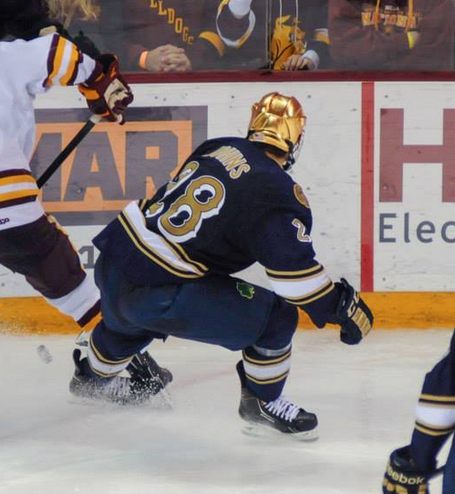 Johns is a defensive defenseman that is an intimidating physical force and punishing hitter. His decision-making sometimes gets him into trouble, but he has the potential to be a reliable second or third pairing defender at the pro level known for crunching opponents with big hits. 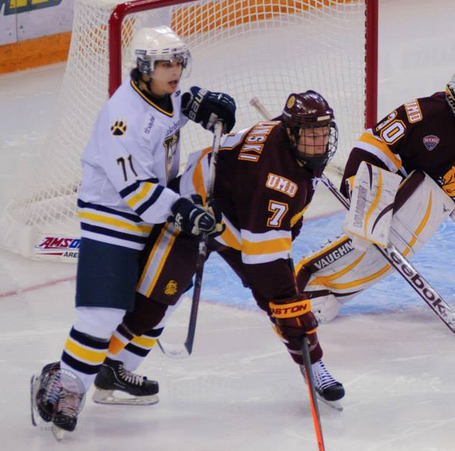 Welinski is a shut-down defensive defenseman that plays his position well and isn't afraid to play a physical game. Minnesota-Duluth has used him on their top pairing this year, including power play duties where he can utilize his heavy, low shot, but his offensive upside remains limited at the pro level. He will, however, be a tough defensive defenseman, with the ability to match-up against nearly anyone.

The Cornell blue liner is a smooth-skating, puck-moving defenseman that can also bring a physical element to the ice. He's terrific as the quarterback on the Big Red power play as the puck goes through him on the blue line. As with most of Mike Schafer's defensemen, Ryan is also responsible in his own end and strong along the boards. 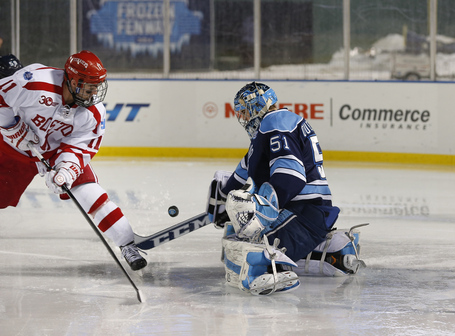 The former Kimball Union star came to Maine as a very young freshman and took a few years to develop. He was terrific down the stretch last season and the first half of this year. He has been more inconsistent in the second half, but some of that has to do with the defense in front of him. He's more of an athletic goaltender who can be acrobatic and make flashy saves.