Kevin Hayes tops this year's list of the best pro prospects in the NCAA.

Share All sharing options for: The Top 100 NHL Prospects in the NCAA: 1-20

Without further ado, here is the first installment of SBN College Hockey's list of the top 100 NHL prospects playing in the NCAA. 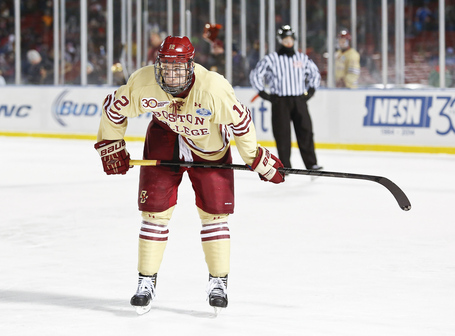 His linemate Johnny Gaudreau gets more headlines, but Hayes' 6-foot-2, 200-plus pound frame allows him to play a power forward game. It's something coach Jerry York is trying to get him to do more of, and when he's at his best, he looks a lot like a David Backes.

After having to sit out the first half of his freshman season, Kerdiles has been a consistent scorer, averaging just over a point per game in his career, and the Badgers are a much better team with him in the lineup. Kerdiles is a bigger winger, listed at 6’1" 201 lbs., and complements that size with incredible hand-eye coordination that should make him an effective scoring wing at the NHL level. 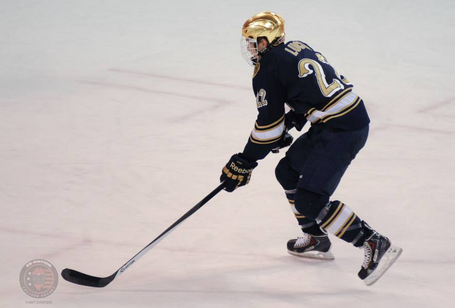 The Notre Dame sophomore has one of the best shots in the country, a fact that even opposing coaches notice. "The goal that Lucia scored might have been the best goal I've ever seen scored. He roofed it in the upper hand corner. It was a pro shot," said UNH head coach Dick Umile after his team beat Notre Dame last month. Lucia has scored 15 goals on the season to lead the Fighting Irish in that category. He is strong on the puck and can play with an edge when called upon. 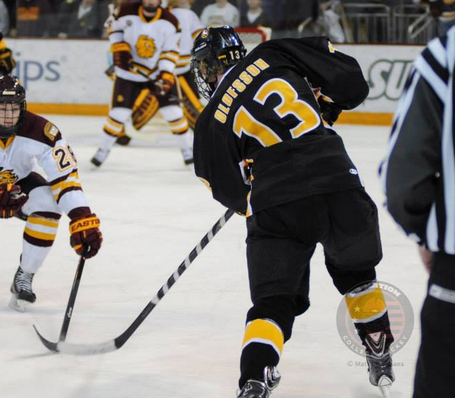 Olofsson has been one of the few bright spots on an otherwise struggling Colorado College team, and acquitted himself very well in helping Sweden win a silver medal at the 2013 World Juniors tournament. Olofsson is an offensive-minded defenseman that moves exceptionally well for a player of his size. He’ll need to get a little stronger and better in the defensive end to play in the NHL, but he has a very high hockey IQ, which bodes well for his development as a player. 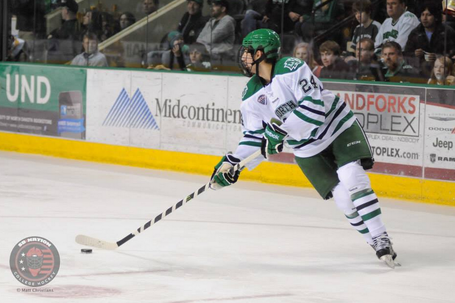 Schmaltz’s statistics at the college level don’t necessarily jump off the page, but the former first round pick is an extremely effective puck mover, while playing responsible defense in his own zone. He sees the ice very well and moves the puck efficiently. Even if he doesn’t put up a ton of points, Schmaltz will be very valuable in the puck possession-oriented NHL.

Gostisbehere is one of the quickest players in the NCAA, and uses that speed from the blue line to be an exceptionally dangerous offensive threat. He is great at skating the puck out of his own zone, and creating his own shot. He leads all defensemen in the NCAA in shots on goal this season.

McCabe was one of the stars of the 2013 gold medal-winning US World Junior team, where his steady play and leadership helped lead the US through the medal round. McCabe doesn’t project as a huge offensive contributor at the NHL level, but he should be a steady, reliable player that can eat a lot of minutes with good, honest defensive play. 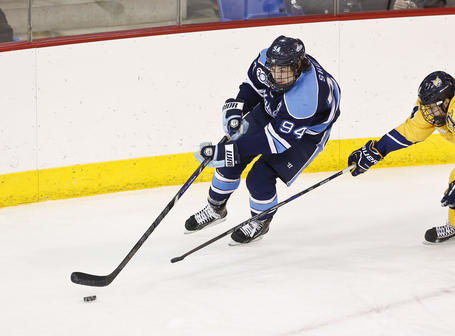 The Ajax, Ontario native might be the best two-way player in the entire country. He has good leverage with the puck and has good catch up speed. His hockey savvy is very noticeable when watching the Black Bears this season. Perhaps no player in the country has carried his team more than the Dallas Stars prospect has. He has a good shot, good vision and has excellent leadership abilities. The sophomore wears an "A" for Red Gendron's team.

After showing flashes of brilliance at the end of last season, Archibald has emerged this season as one of college hockey’s most dangerous offensive threats. He’s got elite-level speed and good finishing touch. He’s not afraid to play with a little edge to his game either.

Compher’s ability to be a gritty, high-energy two-way centerman has never been questioned. But as he has adjusted to college hockey through his first half of a season, Compher has also shown more scoring touch than many expected. The Sabres may have gotten a huge steal when Compher slipped out of the first round of last year’s draft.

Watching Thatcher Demko play, many things jump out at you, but none of them would indicate he just turned 18. The true freshman showed up to BC a year early, and walked onto the Chestnut Hill campus as a 17-year-old. While it took a little while for Demko to supplant himself as the Eagles starter, he's now shined in that role, posting a 13-2-3 record with a .935 save percentage. What jumps out about Demko is a rare mix of size and athleticism. He's also a pretty deft puck handler. The undrafted goalie is all but a lock to be a first round pick in the 2014 draft.

The starting goaltender for the USA at the 2014 World Junior Championship has had a little bit of a sophomore slump, but some of that regression in his play is due to a lingering groin injury that has bothered him since November. Gillies is very strong going post-to-post and is fundamentally sound and rarely, if ever, caught out of position. He has the ability and upside to be a starting goaltender in the NHL.

The son of a former NHLer, Vesey is the offensive catalyst for a struggling Harvard squad. The Nashville prospect could be a power forward at the NHL level, but needs to work on consistency and giving it his all each and every shift. He has good vision and can fit passes in seams as well as having a knack for being in the right place at the right time for goals in the dirty areas. 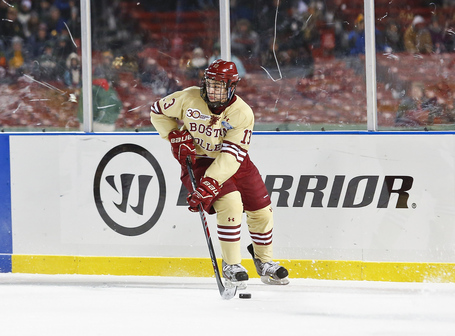 Johnny Gaudreau will win the Hobey Baker Award this season for the top college hockey player in the country. A supremely skilled and intelligent forward, Gaudreau is currently riding a 29-game point streak, and is scoring at unholy clips. But the 5-foot-7 forward will constantly be questioned for his size when the conversation shifts to his NHL prospects, despite his supreme hockey IQ and creativity. He’s an inch shorter than Martin St. Louis, and is exceptional at creating chances for himself or a teammate.

Dowd is underappreciated and overlooked by many, but he’s one of the most complete players in college hockey. He’s playing center at St. Cloud, though likely projects as a wing in the NHL. He mixes a powerful game, grinding along the boards and playing tough defense, with the skill to score goals and effectively set-up teammates. 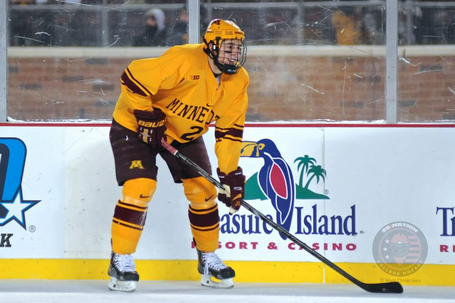 After a rough freshman season, Skjei has looked more like the player that the Rangers were hoping for when they drafted him in the first round of the 2012 Draft. He’s started to harness his incredible skating ability and use it to be a more effective defenseman, rather than running around the ice and constantly finding himself out of position. Skjei has become a leader on the Minnesota blue line, and is still yet to reach his ceiling.

Copp has exploded as a prospect since coming to Michigan as an undrafted walk-on last season. Copp emerged as one of Michigan’s most effective forwards last year, and he’s only gotten better since being drafted by Winnipeg in his second time through the draft last year. He’s already an alternate captain as a sophomore, is leading the Wolverines in goals scored, and earned a spot on the US World Junior team. Copp has the size and athleticism to be a very solid NHL player, and his leadership abilities give him an extra edge over most prospects.

The Vermont defenseman has made tremendous strides in his third season in Burlington, as evident by the praise heaped on him by both his coaching staff and teammates. He has good vision and can start the transition. The physically imposing blue liner plays with a mean streak and can also quarterback the power play

There are moments when Matheson’s true potential blow you away, and show what made him a first round pick in 2012. One of the best defenseman turning the play from his own end up ice, the Panthers prospect is fantastic in transition. His offensive ability isn’t what’s lacking; it’s his play in his own zone that needs improvement. He’s definitely been better this year, but needs to keep making strides.

One of the Eagles many talented freshman, McCoshen has fit right in at Boston College blue line, not showing any signs of fear in his first collegiate season. He’s also contributed four goals and eight assists, a welcome sign as he's never been a prospect especially touted for his offensive game. But nonetheless, that area of his game continues to progress, and his 6-foot-3 frame is something that will always give him a legitimate chance in the NHL. McCoshen needs to up his physicality, and continue to progress on offense. 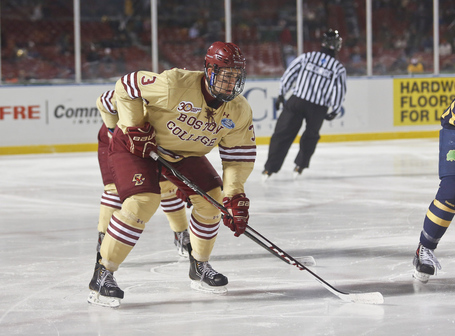