Gophers Hockey: A semi-math related guide for who to cheer for this week

Share All sharing options for: Gophers Hockey: A semi-math related guide for who to cheer for this week

Basked in Big Ten hockey title hangover, something unbelievable even 5 years ago, Minnesota is entering the final week before NCAA Tournament berths following a 6-2 loss to Michigan. Unlike its Gopher basketball counterpart, which is spending Selection Sunday on the bubble, there is less uncertainty with hockey. Minnesota is in the tournament regardless of the Big Ten conference tournament at Xcel Energy Center. Don Lucia's team knows it will make a return trip to St. Paul because the Gophers are West Regional hosts and tied to the venue.

Also unlike basketball's selection process, there are no back rooms filled with cigar smoke and power players positioning teams into the Big Dance. Hockey's system relies on pure, number-crunching math.

Okay, there are some exceptions like two teams from the same conference not playing one another in the first round. For the most part rankings are all based on winning an automatic bid in respective conference tournaments and filling out at-large bids with the Pairwise Rankings.

I won't go into huge detail because several sites do a great job mimicking and predicting Pairwise and Bracketology. It's hard to go wrong with Jayson Moy's Bracketology at USCHO and College Hockey News' "You are the Committee" tool that will pop up later tonight/Monday. Both give a good look at the present and what could be the future this week.

At the same time, there are several scenarios which affect Minnesota - currently the top team in Pairwise - beginning with seven first round conference Game 3s today. It's not as interesting as basketball, or even a bubble team, however, plenty of people have asked me. So I figured I'd deliver with 1350 words.

Without going to into deep analytic math or presenting flowcharts, here's a quick breakdown of what's at stake this week.

BC staves off elimination

With their backs against the wall, Boston College defeated Notre Dame 4-2 to force a decisive Game 3 in their quarterfinal series.

Minnesota will be a #1 seed for the West Regional. Finishing the regular season 24-5-6 and playing one of the toughest schedules in the nation (either the toughest or 3rd-toughest depending on which methodology you use) make it tough to, even by the eye test, deny the Gophers have been one of the top-four teams in the nation. Even without the old WCHA, Minnesota's non-conference schedule featured 6 teams in the Pairwise top 20. Another (Ferris State) almost happened.

Playing a strong non-conference schedule and other Minnesota teams is something Lucia is more than happy about.

"I think the Big Ten has been everything we've hoped it to be in the first year," he said earlier this week. "Having the opportunity to play a very good non-conference schedule has really helped us when you look at who we've been able to play this past year, even non-conference. Our schedule is in the top 2 or 3 in the country and obviously we want to continue to do that, play good teams outside the league."

Even better this week is that is that the Gophers can fall no worse than second. Last night's loss to Michigan hurt as would an upset Friday night by either Michigan State or Ohio State. It won't hurt enough for present 3rd overall team Union (the top 4 overall teams will be one seeds in their respective regions) Union to leapfrog Minnesota.

Even better than that (reading this like a car salesman) is that of the three comparable components which make up Pairwise Rankings - RPI, record vs. common opponents, and head-to-head - the Golden Gophers have the head-to-head comparison won with #2 overall Boston College after tying and defeating the Eagles at Mariucci Arena back in October. Nothing changes that. For BC to leapfrog over Minnesota, it would have to win the other two comparisons.

Minnesota could have clinched the #1 overall seed with a better result Saturday. Even a tie would have done it.

Boston College losing Friday to Notre Dame hurt the Eagles, but a win Saturday and today keep its hopes alive. Minnesota can take care of it with a win Friday or a win by the Fighting Irish today, but there are scenarios (albeit not too many) where Boston College has a better RPI and record vs. common opponents.

Also being the #1 overall seed, or even the #2 overall seed, doesn't guarantee an easier Frozen Four berth if the last few years have taught us anything. Yale defeated second overall seed Minnesota as the 15th seed and won a national championship last year.

What does the #1 overall seed mean?

Being the #1 overall seed comes with the perks of playing the 16th seed, slated closest to home (although this doesn't matter for Minnesota because it hosts a regional) and protected over the second seed. There isn't a case where if seeding bands (1-4, 5-8, etc.) feature two teams in the same conference where the top overall seed ends up with the top second seed in its regional.

This year likely sees a bigger difference in first round opponents too. The top overall seed will face the lowest autobid. Right now, there's at least one - Atlantic Hockey - since no team in that conference would make the NCAA Tournament as an at-large team.

In fact, the highest AHA Pairwise team currently is Mercyhurst at 32.

Facing a team that according to Pairwise is in mid-30s or worse versus the 15th best team (right now a race between North Dakota, Minnesota State, Colgate and Northeastern) is very different. Of course, it is possible that more than one autobid makes the tournament, meaning both #1 and #2 overall face one. 4 of the 5 NCHC teams left could earn automatic bids without being in the Pairwise top 16. So could 2 WCHA teams or 3 Big Ten teams (anyone from Ohio State down). Most are higher than Atlantic Hockey teams although a couple would take the spot of the 16th seed. This will be sorted out later in the week.

Either way, that would still mean facing a hot team which earned an autobid.

Who should Minnesota fans cheer for (besides the Gophers...duh)?

#2 - Colorado College: A CC win tonight over North Dakota knocks UND, whose lost last night hurt and almost requires a NCHC championship appearance now, out of the tournament. That's always something, however, it would mean that all four NCHC road teams won first round series. That possibility would force another automatic bid; dropping the at-large cut-off to 14. (It also means that Target Center has the worst-case scenario for NCHC Frozen Faceoff attendance. Furthermore, I start to wonder if Bruce McLeod has a voodoo doll for a breakaway conference. That's possible, right?)

If CC somehow improbably won the NCHC Frozen Faceoff, the Tigers would likely the 16th seed. Colorado College is the lowest team left in Pairwise besides Penn State.

#3 - Alaska-Anchorage/Bowling Green: Same rationale as CC. Both Minnesota State and Ferris State are locks for the tournament, meaning the Seawolves and Falcons are hunting for the WCHA automatic bid.

There's one more possibility, which I want to hold off on because it both means fans are cheering for a team to lose twice entering the NCAA Tournament and confirm with non-semi math. Don't believe BC can leapfrog if either Michigan State or Ohio State upset Minnesota Friday. That would stop the Gophers from playing another common opponent with Boston College and automatically win that comparable (and by process the comparison by at worst 2-1). The two share common opponents with Michigan, Wisconsin and Penn State 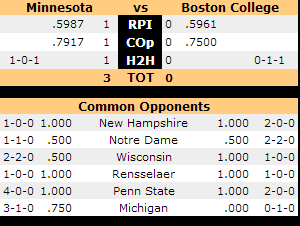 (Warning this is the math part) The above snapshot, taken from CHN, shows the Gophers with a .7917 to .7500 record with common opponents. If BC wins today, they'd have a .7667 win percentage and couldn't inflate it against any other opponent. But I could be wrong, I'm not a bracketologist. I just play one in this article.

So that said: The easiest way to keep that #1 overall seed for Minnesota is to win twice next weekend. Being in the top 5 for the third year in a row is pretty impressive, but so is getting that top overall seed.