Statistics, accolades, and finals thoughts about one of the greatest hockey tournaments in the world.

I had the luxury of attending this year's Minnesota state hockey tournament at the Xcel Energy Center in St. Paul, which proved once again not to disappoint.

This post will include various notes and statistics I collected throughout the tournament as well as some thoughts about the Minnesota hockey in general.

This year was the state of Minnesota's 70th High School Hockey Tournament.  With all the history surrounding the event, it was bound to be yet another fun and exciting year as teams had finally completed their 'Trek to the X'.

East Grand Forks earned their first state title in the program's history with a decisive 7-3 victory over long-time runner-up Hermantown after treking through a few impressive victories to get there. 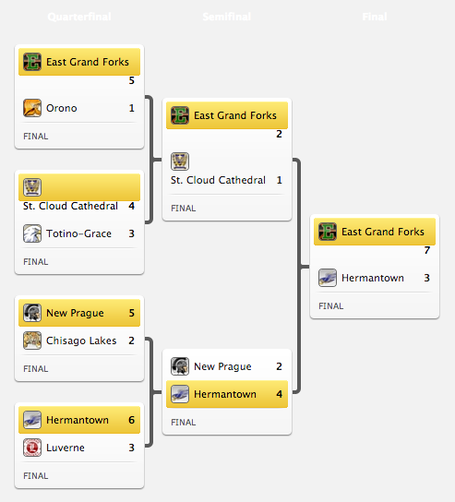 Edina took the title for the second year in a row after routing Lakeville North on Saturday night.  By the end of the third period (which went to running time by the way), Edina had scored 8 goals to Lakeville North's 2. 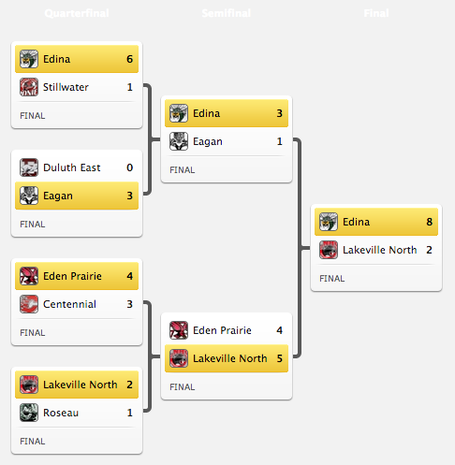 Trying to explain the atmosphere of the of the Minnesota State Hockey Tournament is almost like describing the taste difference between white and milk chocolate.  It's almost impossible if the person you're explaining it to hasn't ever attended the event.

One of the coolest things I was able to witness throughout the tournament was the Minnesota Hockey Coaches Association's Induction Banquet for coaches entering the Hall of Fame.

It was a simple buffet dinner where coaches were honored with awards for various things and some were inducted into the hall of fame.  That sentence makes it sound far more boring than what it really was, though.

Five guys were inducted into the hall of fame; each one bringing something special to the state of hockey.  Pat Furlong, Lorne Grosso, and Roy Nystrom, who all played under John Mariucci for the University of Minnesota were three of the inductees.  Together they combined for an astonishing 1,947 wins.

It was absolutely unbelievable having the opportunity to listen to these guys.

Grosso led the three with 677 wins, and is still coaching at Rochester Mayo.  Add up 677 wins, plus all of the losses, ties, early morning practices, weekend tournaments, and other hours spent coaching and you get a guy that has put his life into the growth of the sport we all know and love.

Each one of these individuals spent more time coaching and teaching young men not only about the game of hockey, but important life lessons as well.  It was an honor to have the opportunity to sit among these guys - the guys who were truly propelling the sport of hockey and creating the atmosphere we all know and love in high school hockey.

This is almost a given.  It doesn't get any better than a wild student section and band playing back and forth across the rink.  Larger school's like Edina had filled a section of students in the lower seating as well as 2 sections above, allowing them to play "marco polo" together.

Chants and cheers were made up on spot in order to pick at the other team and it seemed like the it never stopped.  Even after the final buzzer sounded at the end of the Edina-Lakeville North game, the Lakeville North band still played the school's song.

One of the speakers representing the Minnesota Wild said it best...  The emotion surrounding the tournament isn't the same as that of professional hockey.  It's much more pure.

To this day, Minnesotans who've won a state championship and also won Lord Stanley's Cup, an Olympic Gold Medal, an NCAA National Championship, or even a Hobey Baker will still tell you their fondest memory is hoisting the state title with their teammates in the air.  Don't believe me ask?  TJ Oshie.

At the end of each game you see players clear the bench and rush to their goaltender with helmets and sticks tossed in the air.  On the other side of the ice, it's the complete opposite.  Players with futures in the sport can be seen full of emotion as though it's the last time they'll lace up their skates and coaches rushing to players laying on the ice to support.

It's different.  It's a building filled with a powerful atmopshere, much like Indiana's state basketball tourney and Texas' state football tourney.

Teams were decided on by a panel of coaches and media attending the event.  Ballots were due at the end of the first period of the class title game in order to put together in time for the announcement.

Class 'A' All Tournament Team

This year, Grand Rapids became the first team in the history of the Minnesota hockey to win both the Mr. Hockey award and the Frank Brimsek Award.  Avery Peterson, a Minnesota Wild prospect and Nebraska-Omaha recruit took this year's award after his show of tremendous play throughout the season.

Peterson finished the year with 37 goals and 30 assists for 67 points in just 27 games as a Grand Rapids forward.  Unfortunately, GR's season ended after being defeated by Duluth East in the class 7AA semifinal game.

This year's goaltending choice was a tough one.  Between Mac Berglove (Elk River) and Hunter Shepard (Grand Rapids), I've had the opportunity to view quite a few outings for each netminder, and was never let down in their showing.  This year, Grand Rapids took both awards and Hunter Shepard took the Frank Brimsek award after exhibiting some of the greatest goaltending I've seen.

Shepard finished the year off with an 18-9-0 record, while sporting a .918 save percentage and averaging 2.64 goals against.  Even more impressive, Shepard participated in 12 games in which he failed to allow more than 2 goals.