The University of Minnesota Duluth triumphed over Western Michigan University on Friday night at Lawson Arena in Kalamazoo, Michigan. 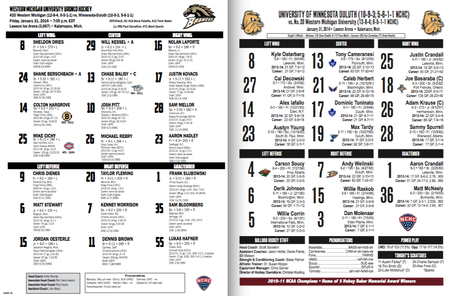 Kyle Osterberg put the Bulldogs on the board first from Caleb Herbert (Washington Capitals) and Justin Crandall during a UMD man-advantage, but Sheldon Dries buried a shorthanded goal during the same five minute major penalty just over a minute later.

During the second period, Minnesota Duluth tallied a goal from Tony Cameranesi (Toronto Maple Leafs) and Western Michigan matched with a power play notch from Kenney Morrison and assists from Colton Hargrove (Boston Bruins) and Justin Kovacs.  The second period would end just like the first, in a tie.

The third period was a different story, though, as the Bulldogs found three goals all while Aaron Crandall held strong between the posts.

The loss ended an impressive 6-game win streak that coach Andy Murray had his Broncos riding, including a GLI championship win over Michigan Tech.  The last team to defeat the Broncos was the Bulldogs back at Amsoil Arena before the midseason break.