A look at how far the rink has come.

After a long time in the works, the 2014 Hockey City Classic is tomorrow (January 17, 2014) at TCF Bank Stadium. The second annual event, which was held in Chicago last February, is the first modern outdoor in the "State of Hockey."

"I think these outdoor games, starting with the NHL and also in college, we all look at our states and say ‘we need to host one,'" said University of Minnesota men's hockey head coach Don Lucia back in September. "It was just a matter of time."

Turning a 50,000 seat college football stadium into an outdoor hockey cathedral can be a challenge, but over the past few weeks that is exactly what tireless workers have done. Their efforts can be seen in the Gopher Sports video below.

The end result is this: 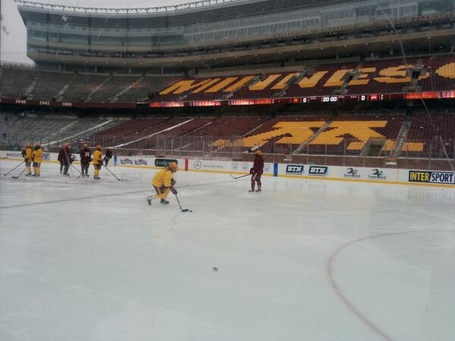 The Hockey City Classic kicks off with the two-time defending champion Minnesota women's team facing Minnesota State at 4:30 p.m. CT. Then it is the Gopher men's team's turn as they play Ohio State at 8:00 p.m. CT.