Bentley senior forward Brett Gensler already has a Walter Brown Award. Can he add Hobey Baker Finalist to his list of accomplishments?

The Atlantic Hockey Association has come a long way since its inaugural season in Division I level back in 1998. First playing under the Metro Atlantic Athletic Conference, the conference was shunned by most members of the media and the fans of the rest of college hockey. Prior to the 2003-04 season, the Atlantic Hockey Association broke away from the MAAC, and has been making tremendous strides ever since.

What was once considered unthinkable has now become commonplace. With the growing acceptance of Atlantic Hockey as a legitimate Division I conference, there has been a Hobey Baker Finalist from the league for three consecutive seasons and six out of the last seven.

This year should be no different with several legitimate Hobey Baker candidates from the conference. Let's take a look at the top five preseason favorites for Hobey Baker from the Atlantic Hockey Association.

Gensler was one of the top recruits in school history when he arrived in Waltham, coming by way of the United States Hockey League (USHL). The St. Charles, Mo. native became the first player from Bentley or Atlantic Hockey to win the 2012 Walter Brown Award, given to the best American-born player in New England. He's a two-time Atlantic Hockey first team all-star having led the league in points per game the past two seasons and holds the single season goal scoring and points record at Bentley.

Gensler probably would have garnered more attention for Hobey during his terrific sophomore campaign if his team had a better season. Gensler should get plenty of attention this season, as Bentley is primed for one of its best seasons yet. The Falcons return their top eight scorers from a year ago and goaltender Braden Komm. Fair or not, Atlantic Hockey's Hobey Finalists have usually come from a team near the top of the standings. Gensler will be the unquestioned leader on a Bentley team that looks to be a contender in the conference.

Gensler has scored 50 and 40 points in the last two seasons to bring his career total to 114. Gensler should be somewhere in that range once again this season, and if he is, there should be no reason he is not a finalist with a legitimate chance to win the award. 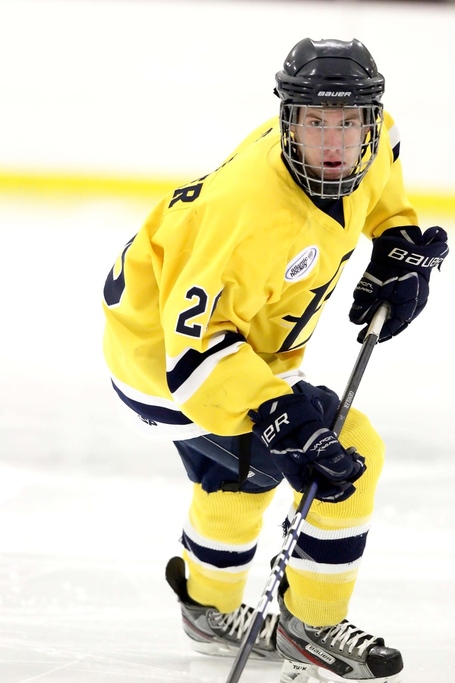 Capobianco saved his best performance for the month of March. The Mississauga, Ontario native posted a .937 save percentage in the month as the Griffs won the Atlantic Hockey Tournament and advanced to the NCAA Tournament. His coming out party might have been in the Atlantic Hockey Quarterfinals where he stopped 90 of 96 shots as Canisius upset Air Force in a two-game sweep.

The Griffs only graduated one defenseman who played regularly last season. Dave Smith's team should be a contender in the Atlantic Hockey Association again this season. If the Griffs make it to a second consecutive NCAA Tournament, Capobianco is sure to be one of the key factors.

His stellar play down the stretch was rewarded with an invite to the Minnesota Wild Development Camp. His career .924 save percentage shows that he has been successful throughout his time at Canisius, but if his play throughout the 2013 playoffs is any indication, even bigger things might be in store for Capobianco.

Gibbons captured the overall scoring and goal scoring titles in Atlantic Hockey last season thanks to a terrific month of March. The Westlake, Ohio native scored 18 of his 43 points in nine games during the month, including a four point effort in the AHA Championship game victory over Mercyhurst.

Gibbons' breakout season gives reason to believe an even better senior year is a possibility. The Golden Griffs return a majority of their offense from a season ago, and have star goaltender Tony Capobianco returning for his final season in Buffalo.

Gibbons, who played junior hockey for the Lincoln Stars in the USHL, was invited to the New Jersey Devils Development Camp this summer. The only thing hurting Gibbons' chances of being a finalist is if his teammate, Capobianco, takes some of the spotlight away.

The Glendale, New York native made the Atlantic Hockey Third Team last year after capturing the league's scoring title. His 34 points in conference play was one more than Gensler. Zay, along with linemate Ryan Misiak, could cause havoc for opposing defenses again this season.

Rick Gotkin's Lakers should have one of the best scoring threats in the league, returning 81.2% of their points from a season ago in which their offense was ranked third in the AHA. Mercyhurst fell short to Canisius in the Atlantic Hockey Championship game, but after graduating just four regulars, the Lakers could take the next step. Zay could be a determining factor in how much success Mercyhurst has this year.

Wydo's 21 goals tied Gibbons for the Atlantic Hockey overall goal scoring title last season, but he will be without linemate Adam Brace who graduated. The Allen Park, Mich. native came to RMU after a stellar junior season in the NAHL where he tallied 91 points in 58 games played.

The biggest question surrounding Wydo is if he can keep up the goal scoring pace without Brace. If he can, he could be a dark horse candidate for Hobey.

Rochester Institute of Technology became the first AHA team to make the Frozen Four when Wayne Wilson's Tigers did so in 2010. Last season was the first time in league history that two teams made the national tournament. Could this be the year the conference breaks through with its first Hobey Baker winner?