Last week, the Upper Midwest Elite Hockey League played at the New Hope Ice Arena in New Hope, MN.  This week, the Elite League was split between Grand Rapids, MN and Stevens Point, WI.  I had the luxury of attending each and every game that was played in Grand Rapids, and boy was it a treat.

With that being said, I was only able to view those teams who played at the location I was at.  Keep that in mind as I go through my thoughts of the weekend.

All games are finished for this week, so the weekend's final league positions are locked.  Here's how they fare as of now:

Roo has learned to use his height to work for him, instead of the other way around.  At 5-foot-7, he's not going to be the kid to come out of the corner with the puck in a pile up, but he will beat you there.  He's very quick and can change directions like flipping a switch, which makes defensemen have to try even harder to guess his next move.  Roo tallied 7 points last weekend in Grand Rapids, helping Team North play the weekend undefeated.

Sheehy's hockey sense is like no other.  He can be very aggressive in situations that allow him to be, but can also play controlled, which makes him very difficult to catch off guard and out of position.  When issued a pass, Sheehy is able to obtain it with control and release a quick shot without spectators knowing what happened, making him especially dangerous when used on the man-advantage.  Sheehy scored 5 goals and had 4 assists, which includes a hat-trick on Sunday morning's win over Team Southwest.

After a less-impacting weekend in New Hope, Novak stepped up to the plate this weekend.  Although the intensity isn't always there, his ability to see the ice is flawless, which he exhibited by creating scoring plays out of what seemed to be simple dump-and-chases.  Novak's shot is lethal, giving him the ability to hit just about any location he wants.  This weekend, he had 5 assists for 7 points.

Reinke proved this weekend why he is one of the best blue-liners in the state.  The minor errors I noted last weekend seemed to have worked themselves out, allowing Reinke to look a lot more comfortable moving the puck among his team.  Although Reinke isn't going to be one of the biggest guys on the ice, he will have one of the best shots, which he proved in the few attempts that were allowed.  Reinke tallied 4 assists last weekend, and will be looking for more as his comfort level with the team grows.

Nanne didn't tally a single point this weekend, but played one of the best defensive positions I've seen.  He comes off as a very aggressive defenseman, those who you would assume would get into trouble, but Nanne is able to read the play as though things were in slow motion.  He completely understands both the offensive and defensive aspects of the game and plays them better than some players are able to play their own.  The biggest shocker?  Nanne's got a blast from the point that I would not have expected from a kid of his size.

Martens was able to come up big for Team Southeast when they needed him most.  He played very well in a weekend that wasn't too fond for goaltenders on any team, exhibiting a .939 save percentage and allowing 4 goals in the two games he started for Southeast.  At about 6-foot-1, he is able to take up a large portion of the net while still having the ability to move quickly in order to beat cross-crease passes.  Martens was peppered with over 60 shots last weekend, but only allowed 4 to squeak by. 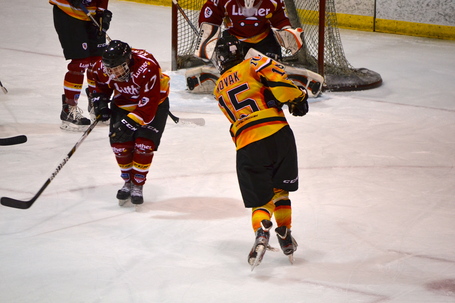 Team of the Week:

After finishing the first weekend winless, Team North turned everything around this weekend and failed to fail.  It was literally like watching a completely new hockey team.  From failing to win corner grinds in their own zone and weak passes, to a team that looked like the term "error" was a word they weren't familiar with.

On Saturday morning, Team Southwest fell victim, 4-1, to this newfound team, followed by a 5-1 victory over formerly-undefeated Team Southeast.  Sunday morning's game against Great Plains brought a little more intensity, as both teams grinded this one out until the very end, but it was the Northerners who came out on top, 5-3.

Hunter Shepard started both the first and last games of the weekend, finishing with a .939 save percentage, while Gabe Heifort started Saturday night's game, in which he stopped 43 of 44 shots, giving him a .977 save percentage.  These two statistics alone show how dangerous this team can be when playing at their top potential.  It'll be interesting to see how things fare for Team North this weekend.

Puck drops in Blaine, MN this week as the NAHL Showcase Tourney will be going on as well.  The hockey action as a whole starts tomorrow morning, bright and early.  I'll be living at the rink from tomorrow morning until Sunday, so follow along for top news.

Also, I would encourage you to follow the Upper Midwest Elite Hockey League on twitter for instant video highlights as they happen.  Pretty neat tool.  Follow here -> @HSEliteHockey

Until then, Happy Hockey!