Is Regular Season College Hockey Coming Back To ESPN?

Share All sharing options for: Is Regular Season College Hockey Coming Back To ESPN?

One of the biggest complaints with college hockey on television, much like the NHL, concerns ESPN. The Worldwide Leader has the rights for the NCAA Tournament yet doesn't show any regular season games. While John Buccigross and Barry Melrose call the championship, the duo only announce six college hockey games together.

It has been at least a few years since ESPNU has shown college hockey - most recently ECAC had a package - but according to the University of Minnesota's schedule the network will be showing the Gophers' inaugural Big Ten game against Wisconsin. 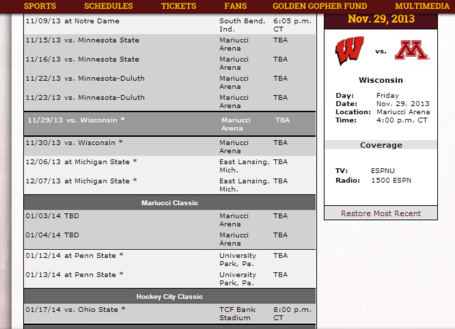