Still trying to take-in all the talent this weekend, we found a way to describe what had us on the edge of our seats during the first weekend of the Upper Midwest High School Elite League.

This past weekend, the Midwest's best prep hockey players gathered at the New Hope Ice Arena for a little showcase hockey.  Being this is one of the best places for recruiters and scouts to watch young talent, sightings of MTU's Mel Pearson, Louie Nanne, and UMD's Scott Sandelin were not out of the ordinary.

Fortunately for me, I was about to watch most every team compete, at least once, with the exception of Team Southwest.  When the Weekend finished, here's how the league looked:

My First Line Jaw Droppers of the weekend:

Suter possess a unique ability to put the puck into tight places.  Exhibiting a great sense of his surroundings and the rest of the ice.  The 5-11 forward can sauce the puck across the rink or blow it by goaltenders when there looked to be no holes.  Suter scored 4 goals and had 4 assists  for 8 points in the Colorado Rampage's 3 games last weekend.

With one if the most accurate shots I saw all tourney, Wahlin was able to bury a backhander just inches out of the crease, going top-shelf, glove-side.  Not being the largest guy on the rink, at 5-9, Walhin has learned to use his size to his advantage.  Quick bursts of speed make him hard to read for opposing teams, especially when possession of the puck belongs to him.

Spinner's ability to see the entire sheet of ice gave him the spotlight when he would create scoring chances off of long, crisp passes or setup plays that didn't seem were possible to create at that given time.  As a bigger forward, almost 6 feet tall, Spinner has learned to use his frame to his advantage whether it be winning battles in the corners or delivering statement-making hits.

I didn't have a long time to review Donohue, but I saw enough to be impressed.  His hockey sense and ability to predict what would happen next blew me away.  If the opportunity presented itself, Donohue could easily work his way down the entire sheet of ice for a shot, which isn't a common trait players at his level are comfortable doing.  He was able to hold the blue line very well; acting aggressive to keep the puck in or backing off when necessary.

Snuggerud displayed a complete set of skills that every coach dreams of in a high school defenseman.  At 6-foot, he was able to successfully deliver big hits and take away scoring chances that seemed to be developing perfectly.  The most interesting thing I noted was his quickness.  Snuggerud's ability to move the puck from one end to the other, all on his own, gave him the look of a quick forward, which I can tell you is uncommon for a kid at his size.

After starting off a little rocky against the Colorado Rampage in Team North's opening game last Saturday, Shepard really turned it around.  In his remaining two games, Shepard was faced with 41 shots, saving 40.  After he got comfortable, Shepard looked to be playing much like how he did in the section final game against Duluth East last year, on his head, and finished the weekend leading goaltenders in both goals against average and save percentage. 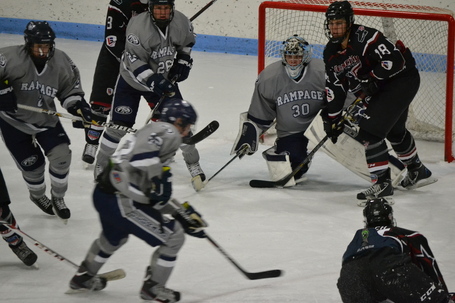 Team of the Week:

I had the opportunity to watch a lot of teams, but the Colorado Rampage were the farthest from home.  With home ice being in Colorado Springs, Colorado, the Rampage could say they were a little ways away from familiar territory.

The Rampage are a AAA team that play out of the Tier 1 Elite Hockey League, which consists of many showcase events all over the country before playoffs begin within the T1EHL.

This team had a little different style than what I noticed with most of the Minnesota teams.  They loved to dump and chase, using pure determination to come out of the corner with puck.  Jack Suter, who's listed above, was one of those players who would come out with the puck, even when going against more than one opponent.

"Jack has this ridiculous skill set," explained Rampage goalie, Jacob Weatherly.  "He's not afraid to go into the corners and somehow always manages to bring the puck out with him, even if he's battling 3 or 4 guys."

It was pretty evident during play; the Rampage were a very physical team, usually wearing down opponents while allowing them to finish the game with an edge.  This would usually result in a victory for the team in grey.

The Rampage went undefeated on Saturday, but suffered a loss Sunday morning, which was unfortunately their last game of the HS Elite League season.  Fortunate for them, they've got all the tools they need in order to have a successful season.

Actually, the puck drops between Team Northwest and Team Northeast at 7pm tonight.  To follow along with goal highlights and instant video clips of major action, go to the HS Elite League Game Page.

The rest of the action starts this weekend in Grand Rapids, MN and Stevens Point, WI.  Until then, enjoy the video that were uploaded by the league and league sponsors showing last weeks action...