Niagara catches a break in the NCAA Hockey tournament against the fictional University of South Dakota hockey team.

It's been an interesting couple of years for the University of North Dakota. The college hockey powerhouse ended a decade-long battle over the "Fighting Sioux" nickname last year by dropping it.

Now they've lost the first part of their state according to the good folks of ESPN. 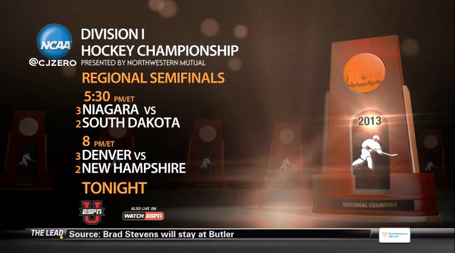 This picture, taken by CJ Fogler, appeared on ESPNU during the first intermission of the Minnesota-Yale game and the chyron mixes up the two Dakota schools much to the chagrin of UND fans. North Dakota is searching for their 8th national championship this year after finishing the year 3rd in the WCHA.

South Dakota, meanwhile, does not have a division one team and has never had one.

North Dakota faces Niagara tonight at 5:30 p.m. ET. The winner faces the winner of Yale/Minnesota. I'm sure ESPN will figure that out soon enough. They're good with hockey.