It won't take long after this weekend's WCHA Final Five for fans to buy tickets to the next college hockey conference tournament at the Xcel Energy Center in St. Paul.

All six teams playing hockey in the Big Ten - Michigan, Michigan State, Minnesota, Ohio State, Penn State and Wisconsin - will be featured at the Xcel Energy Center. The conference, which will play its first season of hockey in 2013, will play a tournament format similar to the present WCHA Final Five with the top 2 teams getting byes and the winner earning an automatic bid to the NCAA Tournament.

They also get a brand-spanking new trophy like the regular season winner. 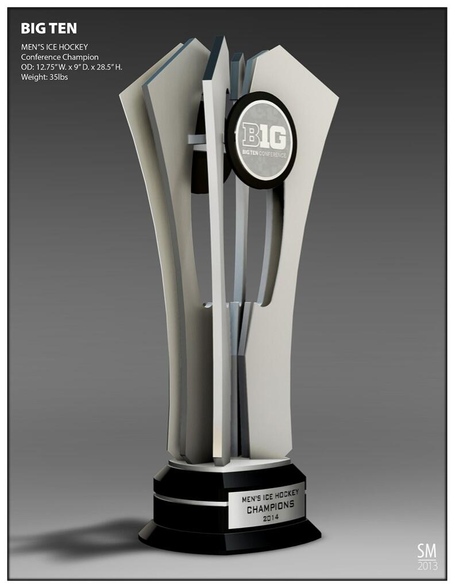 No, it is not the MacNaughton Cup. Or any old trophy. (via assets.sbnation.com)

The news, which was released by the conference today, sets prices that are in line with the newly formed National College Hockey Conference. That tournament will be played at the Target Center in Minneapolis during the same weekend as the Big Ten.

(Ticket information for the NCHC championship can be found here.)

Having two college hockey tournaments in the Twin Cities over the same weekend should be interesting as fans decide which building and conference to watch. Price-wise there isn't a big difference. While the Big Ten has 5 games instead of 4, the NCHC has a cheaper upper level ticket. They also have more teams closer to the Twin Cities but not the name recognition to casual fans that the Big Ten and its teams do.

Conference championship weekend in the Twin Cities has always been one of the major events in college hockey. Although the Big Ten and NCHC are taking over the role the WCHA Final Five has played for 2014, that doesn't go away.