Each of the four teams - Wisconsin, Minnesota, Notre Dame and Miami - playing in the Hockey City Classic at Soldier Field will be wearing unique sweaters that honor the past of their respective programs.

Although outdoor hockey games have become more commonplace in recent years - there was just one last week featuring college teams in Omaha - that doesn't mean the throwback sweaters that come along for the ride are out of fashion.

Each of the four teams participating in this weekend's Hockey City Classic in Chicago have unveiled the special jersey they will wear for the outdoor games at Soldier Field. Minnesota, Notre Dame and Miami each did this that this week while Wisconsin took the lead by unveiling theirs last month.

The Badgers, who are the only school of the four that has previously played an outdoor game, will wear jerseys that are inspired by the 1931-1932 Wisconsin team. The sweaters are white with thin red horizontal piping and "Wisconsin" in curved letters. UW also added a special touch on the collar of the jersey with the famous "Badger" Bob Johnson quote, "It's a great day for hockey" sewn inside it.

Here is Wisconsin captain John Ramage modeling it (via @BadgerMHockey). 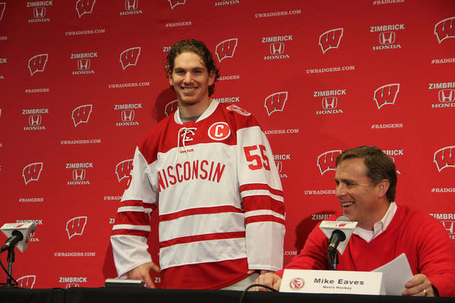 Minnesota, meanwhile, unveiled its jerseys Tuesday night at a ceremony outdoors at Lake of the Isles in Minneapolis. The Gophers will wear an away maroon sweater with diagonal gold lettering (except for the last name being in white) that is based upon the ones the team wore in the 1960-61 season. That season, which was Minnesota hockey legend Lou Nanne's first with Minnesota, ended with a third-place finish in the NCAA Tournament.

(For better pictures of the jersey than the one above, click here.)

In addition to the throwback sweaters, the Gophers will auction them off later to benefit Defending the Blue Line. DTBL is an organization whose mission is to ensure that children of military members are able to have the opportunity to play hockey by providing free equipment and other financial help. They've worked with college teams in the past, most recently last month with Notre Dame.

The Fighting Irish's sweaters represent the outdoors in more than one way. From 1963 to 1968 Notre Dame's club team played its games outdoors in South Bend before bumping up to Division 1 in 1969. The jerseys are based upon that era and are blue with "Irish" spelled horizontally in gold trim.

Below is Anders Lee and Sam Calabrese showing them off. 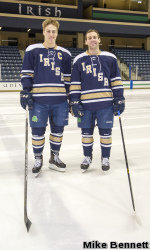 Their opponent Miami unveiled jerseys that have a classic touch. The sweaters are tan with thin red piping and feature the Miami beveled "M" in front. The shoulder are red with tan numbers and names in that area. In addition, Redhawks captain Steven Spinell's "C" will be inside a patch that is the state of Ohio.

Spinelli can be seen modeling the jersey below. 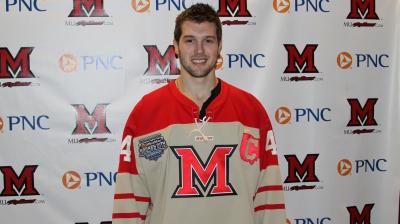 The two games at Soldier Field Sunday begin at noon Central time with #3 Miami and #12 Notre Dame playing in a game that has major CCHA title ramifications. #2 Minnesota and Wisconsin then face off for the final time in the WCHA at 3:30 p.m. CT. Both games are on TV. Miami-Notre Dame will be broadcast on Fox Sports Detroit/Comcast Sports Net and Minnesota-Wisconsin will be broadcast on BTN.

With each of the four schools unveiling their throwback sweater, which one do you like the best?