To Rotate, Or Not To Rotate? Some Coaches Platoon Netminders

With many back-to-backs, some college coaches elect to rotate their goalies, and split the workload.

Share All sharing options for: To Rotate, Or Not To Rotate? Some Coaches Platoon Netminders

Boston, Mass. -- There was some reservation in Jim Madigan's voice. With his Northeastern team having just narrowly lost to Boston College on the road, the Huskies would get another crack at the Eagles the next night.

And despite stellar play from goaltender Clay Witt in a losing effort at Chestnut Hill, Madigan wasn't ready to commit to Witt for the next night when the home-and-home shifted to Matthews Arena.

"Stay tuned," the head coach said, before exiting the press conference and rejoining his players.

Madigan is one of a few coaches who have elected to rotate their goaltenders this season. And while there's no formula on how to employ the goaltenders on a college hockey roster, there are certainly benefits and disadvantages of a rotation.

Through the early part of the college hockey season, 17 teams have two goalies that have seen 37 percent or more of their respective team's starts in net. With the season still being so young, some of those situations are still competitions. After all, conference play is only just getting under way for a number of leagues.

But still, the question remains: Is it worth rotating your goaltenders, and, when is it right or wrong to do so?

Obviously, every team has its own, unique situation. One thing most coaches will say in the midst of a goaltender rotation, despite what the actual reason may be, is both guys "are playing well, and one hasn't distanced himself from the other."

"We've been fortunate with Muse and Milner, and Schneider and Clemmensen; they've really played 95 percent of our games," said Boston College head coach Jerry York, who has split up his starts this season, three going to a freshman, and four going to a junior. "But this year is unique, and we have two goaltenders."

No player ever wants to be benched, and swapping one netminder out for the other certainly puts pressure on either player to perform better. Even if there is an incumbent, or a guy perceived to be the top dog, giving the de facto "backup" playing time creates a competitive environment.

"Moving forward, we'll make those decisions each and every week on who will get the start in goal," Madigan said after the first weekend of the season.

And since then, the coach has been true to his word. Northeastern has played eight games - four weekends of back-to-backs against four different opponents - and his split the time in net in three of those four series.

With college hockey being played primarily on Fridays and Saturdays, rest becomes a big element in this. There aren't many opportunities for days off immediately following one game going into the next. Having a solid option ‘b,' or even a ‘1a' can be crucial in maintaining a high level of play in the crease.

Looking at those 17 teams that have rotated their goalies to some extent this year, it's interesting to note the disparity in play between goaltenders. Of these rotation teams, the one with the largest gap in save percentage between its two goalies is Harvard. (And, to be fair, those percentages are 1.000 - games that Harvard has obviously won-and .915, two pretty stellar marks.)

What the numbers do tell, for the most part, is that when there's less of a drop-off in save percentage between the two goalies, teams generally have better records. (Again, a pretty obvious point, and, we're working with a small sample size.)

Through the first month-plus of the young college hockey season, there have been 10 teams that rotate their goalies, and has between a .01 and .39 difference in their save percentages. Of those teams, seven have winning records, one has a losing record, and two are right at the .500 mark.

For teams where the disparities in their goalies save percentages is .40 or higher (excluding Harvard), two have winning records, three have losing records, and one is at the .500 mark. 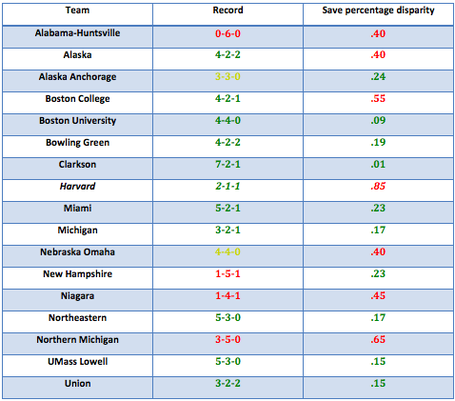 One of those teams with a higher gap in its goalies save percentages, yet is still sporting a winning record is Boston College. The Eagles elected to bring 17-year-old freshman Thatcher Demko in a year early after its workhorse Parker Milner graduated.

"We're fortunate this year that [Brian Billett] and [Demko] are both playing well for us," York said. "I love it when we can have two goaltenders that can play like this."

But what York has opted for this season isn't a change in philosophy, but rather an adjustment based on personnel. There's no telling whether or not Demko and Billett will continue to split time. With two goalies who he feels both deserve a sniff at some action, York is content giving them both looks.

"[Billett] has kind of been under the radar his first two years because of [Milner's] play, but now he's got a chance to play a little bit," he said. "We're going to rotate them for a while, but if there becomes a separation, than certainly one will take over.

"We're just conscious of getting both guys a lot of reps in practice. I'm not blind, I see we've got two good goalies; they'll play."