Minnesota White was crowned victorious after a 2-1 win over Northwood School of Lake Placid, NY.

The number of scouts that lined the railings and bleachers at the CCM International Invitational Tournament this past weekend at the New Hope Arena in New Hope, Minnesota was unbelievable.

NHL Teams, college Teams, and junior teams seemed to each have a representative in New Hope last weekend, looking for athletes that could potentially benefit their team.

In the end, it was Minnesota White who was named the tournament winner, as they defeated Northwood School, located in Lake Placid, New York, by a score of 2-1. 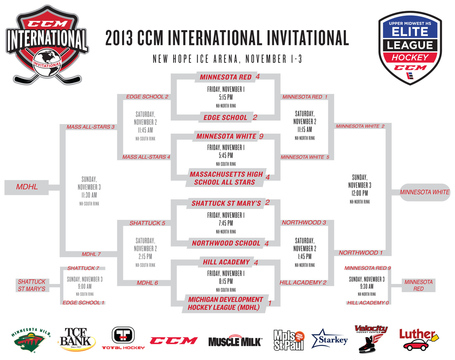 There was a large number of college committed players that played in this event, as I noted in a spreadsheet previewing this tournament, and it's still a question mark as to why Shattuck St. Mary's couldn't pull it together.

Novak, a Minnesota Gopher recruit, scored the game winning goal in the championship game that gave Minnesota White the victory.  The St. Thomas Academy junior stands just under 6 feet tall and has a shot does real damage, as he recorded 6 points in the tournament.  In the blink of an eye, Novak can turn his game on and weave his way to the net, which makes his predictability nearly impossible.

The Minnesota Duluth recruit scored two goals and had three assists throughout the tournament.  Anderson, a Hill-Murray freshman, may have been the youngest guy on the ice, but it rarely every showed, as he made a physical presence when necessary and found ways to create scoring chances throughout each game.  Anderson has a great shot and is able to score goals by putting himself in the right positions at the right time.

The future Nebraska-Omaha Maverick scored two goals and tallied an assist on the weekend, but was easily noticed on every shift.  The Eden Prairie senior is fast.  Spinner's wheels allow him to keep the pressure on while killing penalties, thus frustrating opponents as they couldn't even break the puck out of their own end.  Complementing his speed, Spinner has a fantastic shot and can see the ice very well.  Combine those traits and you can get one heckuva dangerous forward.

Snuggerud, another Nebraska-Omaha recruit, only recorded one assist on the weekend, but was a constant threat on the ice.  The Eden Prairie senior has great vision and offensive moves to go with it.  Snuggerud easily wins puck battles in the corner and can then fire a pass across the ice without hesitation.  Gifted with a heavy shot, 6-foot blueliner is more than lethal on the ice.

The future Wisconsin Badger was held to a single point on the weekend, but could be seen making plays every time his foot touched the ice.  The Ashwaubenon, WI senior is incredibly smart and can see the ice very well, which he proved time and time again as he made quick decisions to get the puck out of his team's zone.

For more information about the final standings, statistics, or to read game recaps - head over to HS Elite Hockey.