Former Western Collegiate Hockey Association intrastate rivals, the Minnesota Golden Gophers and Minnesota Duluth Bulldogs, will square off for the 221st and 222nd games at Mariucci Arena in an overall series owned by Minnesota 132-72-16. 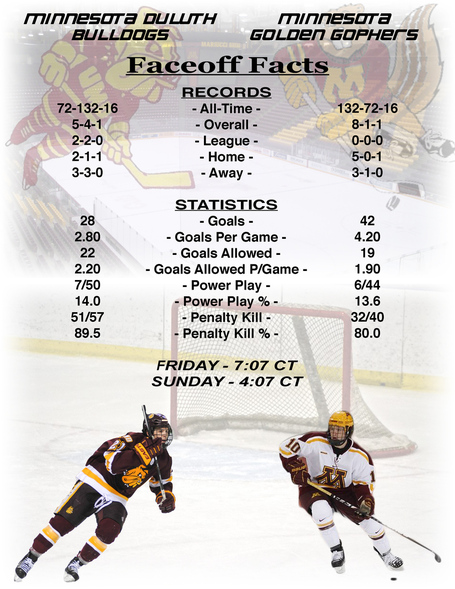 The Series began back on Dec. 1, 1952 when John Mariucci brought his Gopher squad to faceoff against Gord Eddolls' Bulldogs. Since then, the former Western Collegiate Hockey Association rivals 220 games, not counting this weekend's matchup. The Minnesota Golden Gophers own the all-time record at 132-72-16.

It’s been almost a half century since UMD and Minnesota last collided in a non-conference series. On Feb. 5-6, 1965, the host Gophers swept the Bulldogs. UMD joined the WCHA the following season and became league partners with Minnesota in the following year.

In the last 10 meetings, Minnesota is 5-2-3 while the Gophers have a four-game unbeaten streak (2-0-2) against Minnesota Duluth with the team’s last loss to the Bulldogs at Mariucci Arena occurring on Nov. 21, 2009 in a 3-2 loss.

UMD’s last shutout against Minneapolis came on Feb. 23, 1973. Goaltender Jerome Mrazek stopped a whopping 52 shots in backstopping the Bulldogs to an 8-0 win that night.

The University of Minnesota Golden Gophers

Sam Warning has tallied a point in all 10 games for the Gophers this season and his 10-game point streak is a career-long.  Warning also leads the team in total points, with 17, but Hudson Fasching has buried the most goals (6).  The 8 Gopher Freshmen have scored 19 goals for the Gophers for 48 total points this season, which puts them at 41.7% of Minnesota's overall scoring.

In 48 career games played, Adam Wilcox has posted a 32-9-6 overall record. Out of those games, 23 have been played against nationally ranked opponents with the sophomore netminder recording an 13-7-3 record against ranked teams with No. 19 Minnesota Duluth coming to Mariucci Arena this weekend.

The University of Minnesota Duluth Bulldogs

Led by captains Joe Basaraba and Adam Krause, the Bulldog offensive unit looks to improve weekend after weekend.  The Bulldogs seven rookies are collectively averaging 3.2 points per game, which ranks them fifth in the country in that category.  Freshmen Alex Iafallo, Willie Raskob, Dominic Toninato, and Kyle Osterberg have a combined for 26 points this season.

Junior right winger Adam Krause, who came into last Friday night’s bout at North Dakota with two collegiate goals to his name (in 74 outings), scored three times during the weekend.

The Bulldogs also sport the 4th best shot differential in the country at +8.80, peppering opponents, on average, with 32.2 shots per game.

Senior defenseman Tim Smith leads all 2013-14 Bulldogs in plus-minus rating (+8) and is a team-leading +17 for his career.

UMD hasn’t played at home since Oct. 25-26 and won’t return to AMSOIL Arena until Dec. 6. The Bulldogs still have this weekend’s series at Minnesota along with a bye weekend (Nov. 29-30) before then.

Rookie right winger Sammy Spurrell has scored on two of his four shots on net this season and both of those goals have turned out to be game winners.

All but one of Alex Iafallo’s team-leading 10 points this season have been registered on the road.

The Bulldogs are 3-1-1 in rematch games this season and have averaged 3.6 goals per outing. In contrast, they are 2-3-0 on Friday nights while scoring at a 2.0 goals a game clip.

Minnesota reunites a line from last season . Junior forward Travis Boyd is joined on the third line by senior Tom Serratore and junior Seth Ambroz. The move paid off for Minnesota in Saturday's 3-0 win over Minnesota State when Lucia put them together for the last ten minutes. Up 1-0, Serratore scored his first goal of the year to give the Gophers an insurance goal needed.

"It's an easy move to make in-game," Minnesota's coach said after Saturday's game.

Other moves for Minnesota include Gabe Guertler returning after being scratched Saturday in place of Christian Isackson and Connor Reilly sitting for A.J. Michaelson. Michaelson hasn't played for the Gophers since November 9 at Notre Dame. He has sat four of the last five games.

Both Matt Christians and Nathan Wells are live at Mariucci Arena.