Between the Pipes: Ryan McKay

A good goaltender is hard to find, but coach Enrico Blasi of the Miami Redhawks has found one in sophomore Ryan McKay.

Share All sharing options for: Between the Pipes: Ryan McKay

To those of you who've had an opportunity to suit up and play goalie for a season, game, or even a practice know how difficult it is.

The pads weigh a ton, moving is next to impossible, and if there happens to be action anywhere near, nerves can just about cause an anxiety attack.  A shootout would be a whole new story...

Goaltenders are incredible athletes and an interesting breed.  The ability to remain calm while trying to focus on the defenseman who's winding up behind the four players standing in front, and make a split second save as you see the puck come into peripheral view is absolutely incredible.  That being said, no matter what your parents may have told you, everyone isn't special enough to have the skill set required to man the net for a division one college hockey team. 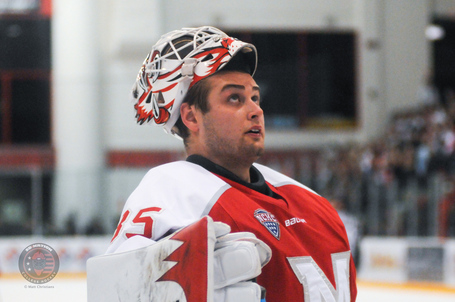 For sophomore net-minder Ryan McKay of the NCHC's Miami Redhawks, things have turned out quite well.

In the 2008-09 season, when Jerry York was working his Boston College Eagles towards what would end up as a national title against Notre Dame, McKay was slowly making a name for himself with Team Illinois' U16 team, followed by the Chicago Young Americans U18 in the following year.

He found a home with the Green Bay Gamblers after they drafted him #26th overall for the 2009-10 season, and helped the team win the USHL's Clark Cup Championship by playing in 24 regular season games.  This was just the beginning.

The following season, 2010-11, McKay established himself as one of the top goaltenders in all of the USHL by leading the league in goals-against average (2.00) and save percentage (.928), which allowed him the opportunity to perform in the league's All-Star game.

McKay kept the pace up for his last season (2011-12) with the Gamblers, and helped them not only return to the championship game, but take home another Clark Cup title.  He led the league in goals-against average once again with a 2.18 and was name the USHL's goaltender of the year.

He had a successful junior hockey career in Green Bay to say the least.

As a true freshman for Miami last year, he helped the Redhawk's claim the CCHA's regular season title and won a spot on the CCHA All-Rookie Team.  Unfortunately for McKay and the Redhawks, they met with a very hot St. Cloud State team in the Midwest Regional Final, falling 4-1. 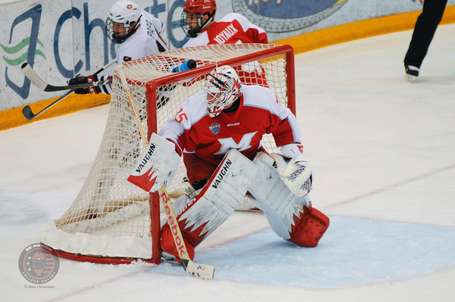 Last weekend, history seemed to have repeated itself...  in a way.

The #5 ranked Miami Redhawks traveled west to take on the #2 ranked St. Cloud State Huskies, who rode a wave of momentum back into St. Cloud after sweeping North Dakota, on the road, in the previous weekend.

McKay received the nod to defend Miami's net on Friday, which ended up being one of Blasi's best decisions of the night, especially against a team playing as well as St. Cloud was.

"We knew we had to come in, play hard, and play our game," said Blasi.  "Our penalty killers did a great job.  (We were) blocking a lot of shots and when they did get through, Ryan was there to make the save."

The Redhawk defense shut down the Husky power play five times, blocked 17 shots, and McKay finished with 31 saves in the game, some of which he had no business making.

"I thought their goalie and their team defense was outstanding," said St. Cloud State coach Bob Motzko.  "You have to score a goal at home; and the chances we did have, they played great defensively and their goalie was on it."

When asked about his shutout, McKay responded modestly, dispersing credit to his teammates.

"It's more of a team effort type of thing to be honest," said McKay when asked about his saves.  "I knew I was going to have to make some saves, but we blocked a ton of shots and those sacrifices are the difference.  I felt like it was our most complete game all season and against the hottest team in the country."

The Redhawks would split the series with the Huskies, falling 2-1 in an intense game on Saturday night, but McKay and the Miami defense held St. Cloud State to another night of zero power play goals.

The loss was Miami's 3rd of the year, but McKay's 1st this season.  The goaltender's bizarre tie in Providence on October 26th, where the Friars scored multiple times, was the closest McKay had come to a loss this season previous to last Friday, giving the 6-foot-1, 224 pounder a 4-1-1 overall record.

"The one game (Ryan) let in four goals was not indicative of his game," explained Blasi of the 4-4 tie in Providence.  "He works his butt of during the week and spend a lot of time studying the game."

It seems as though Blasi is right, too.  McKay is recording a remarkable .942 save percentage and allowing, on average, only 1.82 goals per game this season.

"(Ryan) did it last year for us so it's not like it's a surprise to us, said Blasi of the solid goaltending.  "Ryan is seeing the puck very well right now and doing a great job."

This weekend the Redhawks host a non-conference series with the Wisconsin Badgers.  A team that has gotten off to a rough start, but cannot be underestimated with the amount of talent coach Mike Eaves had returning for his Badgers this season.

Whether Wisconsin is able to come out with intensity and fire shots on goal or not, Blasi and the rest of the Miami Redhawks are aware of what McKay is capable of, even in difficult situations.  He's no stranger to exhausting scenarios and his experience can only benefit him as the season progresses.

"I'm 21, but i've been playing the game since I was 5 years old," explained McKay of the tedious situations he's dealt with.  "It's one of those things as a goalie you have to welcome and execute just like any position in hockey." 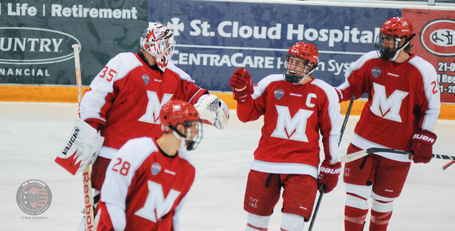