The rosters and schedule has been announced for the 2013 CCM International Invitational Tournament in New Hope, Minnesota.

Edge School, Northwood Prep, Hill Academy, the Massachusetts High School All-Stars, Shattuck-St. Mary's, and the Michigan Development Hockey League team will all join team Minnesota Red and White to compete in the tournament, which draws both fans and scouts from all over.

The CCM tournament kicks off a weekend after the Upper Midwest High School Elite League champion is found, which just so happens to be Team Southwest this year. Minnesota Red and Minnesota White consist of the top talent that the Elite League had to offer, including individuals that were on Team Wisconsin. 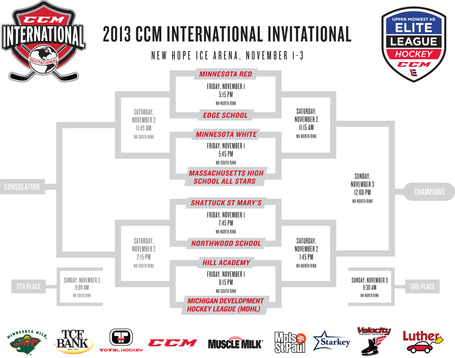 Below is a list of the college-committed athletes that plan to square off in the tournament.

This tournament is absolute gold if you're looking for some good amateur hockey. It's also a great opportunity to watch top-end talent develop and grow. The schedule and complete rosters can be found at HS Elite League Hockey's website.