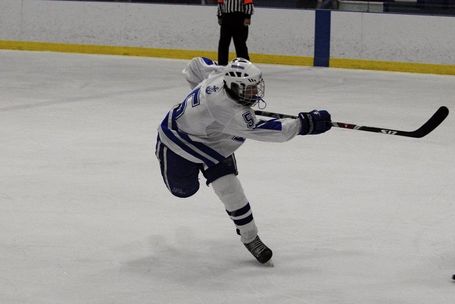 Justin Holl can be considered a bit of a late-bloomer. When it was announced last summer that he had verbally committed to play for the University of Minnesota, the reaction of many people was "Who?" Most were more familiar with teammates Troy Hesketh, who was a third round selection of the Edmonton Oilers last year, and Max Gardiner, who committed to Minnesota at a young age, but knew little about Holl, who put up modest stats as a junior for the Skippers.

But similar to former Minnetonka defenseman Jake Gardiner, Holl exploded with a dominating senior season that helped him become a top prospect for this year's draft. Holl's best asset by far is his smooth skating. He's still fine-tuning some of the other aspects of his game, but plays with an aggressive mentality and is always trying to make things happen on the ice.

Holl sandwiched his high school season between brief stints with the Omaha Lancers of the USHL, and was successful in the faster, more physical league. He'll head to the University of Minnesota next season to continue his hockey career.

November 2, 2009:"Justin Holl: Holl could be another late riser in the draft. He's not very polished as a player. He doesn't have much offensively, and got caught out of position a number of times defensively. But he's got pretty impressive size and strength and he skates really well, which was enough to make him one of the best players out there. Again, very far away from a finished product, and he'll spend some time in the USHL before going to Minnesota, but there's a good bit of potential there."

November 10, 2009: "Justin Holl-He ended the weekend with an OT goal, but prior to that, he was pretty much a non-factor. The speed of play went up this weekend and he seemed kind of lost. He's still very much a project, and hopefully he develops with some time in the USHL."

December 22, 2009: "As for Minnetonka, last night didn't really change any of my opinions of their big three defenseman from earlier this year. Prochno is still really, really good, but his size will keep him from being drafted, Hesketh is good, but you still feel like he could be doing more out there, and Holl is the least developed, but probably has the most potential."

January 11, 2010: "54. Justin Holl-Minnetonka(Minnesota)-Justin Holl kind of reminds me of David Fischer in his draft year. Tons of potential that hasn't quite been put together yet--and still hasn't in Fischer's case. The difference was that Fischer was the top player in Minnesota in a weak year in his draft year, and there are a couple players better than Holl this year. If Holl was in Fischer's position, he might be talked about as a potential first round pick. I haven't been blown away by Holl this year, but his potential would make me think about picking him in the late-third round where he's ranked right now."

Holl might not be one of the best hockey players in the draft right now, but teams are drafting based on what they think a player can do three or four years down the road. Keeping that in mind, Holl has a number of NHL-caliber physical talents that can't be taught, and some team will likely be willing to take the gamble that he eventually develops the other aspects of his game. The comparison to Jake Gardiner seems appropriate here. I wasn't overly impressed with Holl at times this year, but I was also pretty critical about some of the finer points in Gardiner's game during his draft year, and he eventually figured it out. I won't open a can of worms by comparing how much of a factor the coaching Gardiner received at Wisconsin played a role in this compared to what Holl will receive at Minnesota.

Holl is most likely a third round draft pick, though he could slip into the second round if a certain team is especially convinced he's got a good shot of reaching his potential. Whichever team ends up with Holl will likely need to be patient and give him an extra few years to develop, but they could be greatly rewarded if things work out.