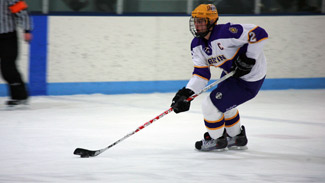 For most of this year, Mark Alt was a question mark for this draft. In addition to being a talented hockey player, Alt was also a star quarterback at Cretin-Derham Hall High School, and unsure of which path he wanted to follow in the future. Pushing him towards the direction of football was his father, John Alt, who was a great offensive lineman for the Kansas City Chiefs in the mid-90's.

Ultimately, Alt decided he had more of a future in the game of hockey, where he was projected as a top three round draft pick, as opposed to football, where he only received marginal interest from college programs as a quarterback.

Alt is a draft prospect because he has the big size of a football player, but is also a very mobile skater. His biggest draw back is that some have questioned his hockey sense, though there is certainly room for that to improve now that he has fully committed to being a hockey player.

He'll continue his hockey career next season playing for the University of Minnesota.

Alt Deciding Between Hockey and Football-CollegeHockey247-February 2010

July 17, 2008: "Mark Alt(Minnesota recruit)-Huge defenseman that is incredibly athletic. Should be a very high draft pick in 2010."

November 17, 2009: "Mark Alt might be the best athlete playing high school hockey in the state. The big, smooth-skating defenseman was also a star quarterback for his high school, and a marginal Division I college football prospect. But there are also some question marks about his hockey sense.

Players his size that skate like he does don't come around very often, which is sure to have scouts intrigued, and if he plays well, he might have an outside shot at even winning the award, but odds are, he's not quite polished enough yet to be seriously considered."

Alt may be a bit of a risky pick, but his upside is so great that it's hard to imagine him lasting much past the second or third round. In a different year without as much depth, a player with Alt's size and upside may have been considered a first round draft pick. This year, there are enough less risky picks out there that Alt will probably slide to somewhere around the late 2nd to 3rd round.

Next year should be a big adjustment year for Alt as he makes the transition to college hockey. In recent history, a number of NHL prospect defensemen have struggled with their development at Minnesota. But Alt's athleticism may be enough to carry him while he learns the game.

In the future, Alt will likely be more of a defensive defenseman. He didn't put up huge points, even at the high school level, but he's got a big frame, and should be able to skate with anyone, which could make him a solid second pairing defenseman at the NHL level if he reaches his potential.