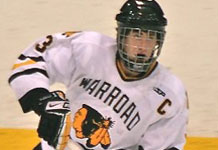 Coming from the small hockey hockey hotbed of Warroad, Minnesota, in the northwest corner of the state, Brock Nelson seems to have the bloodlines that make him destined for big things in hockey. His uncle Dave Christian played with the 1980 Miracle on Ice gold-medal winning team, while his grandfather, Bill Christian, and great uncle, Roger Christian, pulled perhaps an even bigger upset in helping the 1960 US Olympic team to a gold medal.

Bloodlines aside, Nelson is a fine hockey player in his own right. He combines the size of a power forward with soft hands and an excellent shot. With rival Roseau opting to play up in Class AA, Warroad has been able to dominate the smaller schools in Class A. The Warriors made the state tournament in every season Nelson played with them, including this past year, when they fell in the state semifinals to a powerhouse Breck team. Nelson finished the season with 73 points, though given some of his competition, he could have easily had more, and was a finalist for the Mr. Hockey Award. Though not officially announced, it was pretty much a given that Nelson was a close runner-up to Nick Bjugstad.

Nelson has committed to play college hockey at the University of North Dakota. Initially he was scheduled to play a year in the USHL prior to heading to Grand Forks, but if he ends up being picked high enough in the NHL Draft, which he likely will, that would likely force North Dakota to add him for next season.

November 2, 2009: "Nelson has started drawing a lot of draft buzz for his play in the Elite League this year and could end up going pretty high in the draft. He's another big, but fairly raw power forward.

Friday night he was pretty underwhelming. Saturday was much better, in large part because his linemate Adam Knochenmus(more on him later on) wasn't there on Friday, but was on Saturday. Friday night, it felt like Nelson had to all his own creating, which is probably outside of his comfort zone right now. Saturday, he picked up a nice goal where Knochenmus set things up, fired a puck on goal, and Nelson just had to get to the front of the net, where he looks a lot more comfortable for a nice tip-in.Overall, he was just more effective.

The bottom line is that I think some teams will see a ton of potential in him as a future power forward and love him, and some teams will be scared away because he's got such a long ways to go. North Dakota has him scheduled to play in the USHL next season, which seems like a very good idea. I don't think he'd be ready to play regularly and contribute for the Sioux next season. A good comparison might be Mike Forney, who went to North Dakota straight from high school, in part because of his high draft status, and struggled to see the ice, which really hurt his development."

November 10, 2009: "Brock Nelson-You really have to watch him when he doesn't have the puck to appreciate what he does offensively. He does an amazing job of sliding into the perfect scoring spot right as the puck gets there. He was paired with Adam Knochenmus again and Knochenmus is great at being the first guy into the corner to dig out the puck, and Nelson just had to slide into position and finish off plays."

November 17, 2009: "At the end of last season, Brock Nelson may have been lower on this list, despite helping lead his Warroad Warriors to the state tournament. But Nelson had an exceptional fall Elite League, which helped him earn a commitment to North Dakota, and catch the attention of many scouts to becoming a rising prospect for the NHL Draft.

There are a couple things working against Nelson. First, his power forward style of play works more effectively with a playmaker helping set him up. Nelson isn't the type of player to skate end-to-end around five guys and score a goal. Second, fair or not, he's not going to get nearly the attention of a Bjugstad or Herbert playing in the northwest corner of the state. But while the average hockey fan or media member may not follow him much up there, there will definitely be a lot of scouts that make the trip up to Warroad and they'll recognize what a quality hockey player he is."

January 11, 2010: "17. Brock Nelson-Warroad(North Dakota)-I think Nelson is way too high here. He's a very talented kid, but I think he's too much of a project to spend a first round pick on in a year that is so deep with so many good players. I see Nelson has more of a late-second or third round pick."

Nelson, being a prospect that not many outsiders know a lot about it, being from Warroad, and committing to North Dakota, inevitably draws comparisons to T.J. Oshie. Of course, the comparison could just as easily be drawn to Mike Forney, who also came from that part of the state, committed to North Dakota, and was known for having good size and soft hands. Forney dropped to the third round, couldn't find ice time at North Dakota and spent most of the last year in the ECHL this past year, though his career was hampered by nagging injuries.

Nelson almost certainly falls somewhere in the middle of the Oshie-Forney spectrum. I tend to be a bit less optimistic than most, rating Nelson in the mid-second round on my draft list, though many have him in the first round, and in some cases, as high as the mid-first round. The parameters of the NHL Draft are especially difficult with someone like Nelson, because of the level of competition he played against last year. It would be so much easier to get a read on him after seeing him play a year of college hockey, or even a year in the USHL. Nelson may have more potential than many players in this draft, but I think there's also more risk in taking him as well.

The decision not to have him play in the USHL means North Dakota doesn't expect him to be around all four years, and wants to get as much use out of him as they can. Still, he's a player that probably could have used some time in junior hockey, which means he might make a slower transition to college hockey next season. Hopefully he flourishes with that transition like Oshie did, rather than stunting his development like it did with Forney.