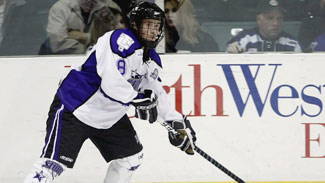 Jaden Schwartz first got noticed in a big way in 2007-2008, when he broke scoring records held by NHL stars Vincent Lecavalier and Brad Richards at the famous Notre Dame Prep School in Saskatchewan.(Despite that, it should be noted Schwartz likely won't even be the first player off that Notre Dame Midget team to be picked in the draft, with that honor going to Brandon Gormley. Another ND teammate, Sean Couturier, may be next year's top overall pick) Schwartz, despite not being the biggest player, hasn't stopped scoring since. After a successful season in the SJHL, Schwartz decided to raise the level of competition in his draft year and play for Tri-City in the USHL. He did nothing less than impress by leading the league in scoring.

Schwartz's greatest asset is his ability to control the puck and to make plays in the offensive zone. His size works against him, and he isn't the fastest skater, but his rare playmaking abilities could make him a valuable player in the NHL.

Though Schwartz has been highly coveted by the WHL, he will most likely continue his hockey career at Colorado College next season, where his older brother Rylan will be a sophomore next year.The two brothers will be expected to help carry the Tigers' offense next season.

Recently, Schwartz's family suffered a terrible blow when Jaden's older sister, Mandi, a hockey player for the Yale University women's team, was diagnosed with leukemia. She will need a bone marrow transplant or stem-cell transplant in the next 30 or 40 days to save her life.

Schwartz is coming into the NHL Draft at the right time. Years ago, a player with his size would have been heavily downgraded, but the latest focus in the NHL is on finding extremely skilled players, regardless of size, and Schwartz definitely fits that bill. He's like a slightly less-polished--or some might argue merely less-hyped--version of Jeff Skinner, who may reach the top 10 of the draft. Schwartz will likely be on the bubble between the late first round and early second round.

The risk in taking a player like him is that if he can't continue scoring at such a rapid pace in the pro level, there's really not a lot else he's going to provide a team, but if a team is willing to swing for the fences, they may end up with a home run in Schwartz.