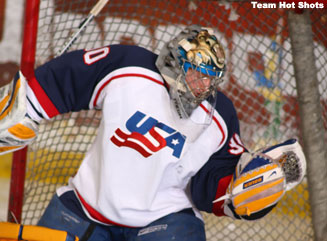 Gothberg is a talented goalie from the small town of Thief River Falls, Minnesota, in the upper northwest corner of the state that is headed to play at the University of North Dakota. He's not the first goalie from that small town to do that, however. It's the same path followed by the namesake of both his former and future homes, controversial casino magnate Ralph Englestad.

It's rare to see NHL-caliber goalies come out of the state of Minnesota, though Gothberg could be an exception to that rule, similar to Mike Lee, who was drafted last year by the Phoenix Coyotes in the second round of the draft. Gothberg is cut from the mold as Lee in many ways. Both goalies have good size that allows them to use their size and positioning to take up much of the net, but have the athleticism to make tough saves. Both are also hard workers and have good personalities.

One difference from Lee is that Gothberg won't be making the jump straight to college hockey next season. With North Dakota being secure in their goalie situation with Buffalo Sabres prospect Brad Eidsness for the next two years, Gothberg will play for the Fargo Force of the USHL, where he'll see much more playing time for the next year or two, before starting at North Dakota.

May 13, 2009: "Fargo selected next and took Zane Gothberg, a goalie from Thief River Falls in the northwest part of Minnesota. Gothberg has been one of the best goalies in the state of Minnesota the past two years, but has done so quietly since he plays in TRF"

November 10, 2009: "Zane Gothberg-Never really tested that much because he had a ridiculous defense in front of him. Pretty much all of the shots he faced were from the perimeter, which he handled very well. He looked really good, but he's probably the one kid that will be better to judge during the high school season when he gets 40-50 shots a game for TRF."

Gothberg is extremely talented, but being a goalie, there are some factors outside of his control working against him. First, with goalies developing slower than position players, history suggests teams are better off not trying to draft goalies, and instead trying to pick up more proven commodities on the free agent market. Second, Gothberg's fortunes may be directly tied to some of the goalies projected ahead of him like Jack Campbell and Calvin Pickard, both of whom are considered mid-to-late first round talents, but could go much higher or lower than that depending on the whims of the drafting teams.

There's a high amount of risk in drafting a goalie--especially out of Minnesota where the list of NHL goalie alums is very unimpressive--but Gothberg's talent will be too much for a team to pass up. The third round is probably the most earliest Gothberg could go, but he will most likely end up in the fourth round or later. Whichever team drafts him will end up with a talented player and they'll have the opportunity to let him mature and develop for a long time before having to make a decision on signing him.