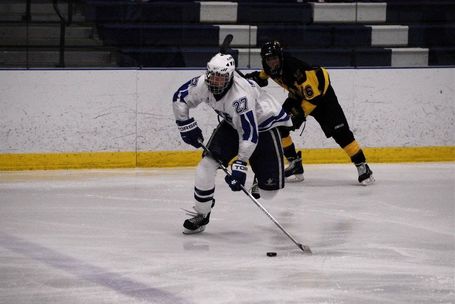 Gardiner is perhaps most commonly known as being the younger brother of Anaheim first round pick Jake Gardiner. But there are some pretty big differences between the two brothers. Max stuck at forward while Jake moved back to defense in high school. Jake plays for rival Wisconsin while Max chose to stay close to home and play for Minnesota. Jake is known for his fluid skating while Max's skating style is considered pretty unconventional. Jake was more of a late-bloomer, while Max has been considered near the top of his age group for years now.

Gardiner is a big power forward that likes to throw his weight around. His skating is a little suspect, but he has a tireless work ethic, and always seems to be in the middle of the play and making things happen.

Gardiner will most likely spend a year in the USHL before heading to the University of Minnesota.

November 10, 2008: "Max Gardiner still doesn't have the skating ability of his brother, but he gets around ok and really uses his size to create havoc."

November 2, 2009: "Max Gardiner: I've always questioned whether Gardiner's skating would be good enough to by at higher levels. He works really hard, but he's not quite quick enough to make things happen offensively. He's incredibly strong though, and always a phyisical presence on the ice."

December 22, 2009: "Max Gardiner is still hard to judge at forward. In the high school game, he's still doing a lot of skating with the puck in open ice, and that's never going to be his specialty. At the next level, he'll be a guy that does most of his work fighting along the boards and making plays from there. There's not a lot of grinding it out along the boards in high school hockey though. He had a solid game though. He's making a lot of plays and is really a leader for his team."

January 11, 2010: "36. Max Gardiner-Minnetonka(Minnesota)-I've always had Gardiner lower than most people, though he was starting to win me over with his play during the high school season, before he broke his wrist right after Christmas. I still have him lower than 36th, and the injury will probably push him a little lower."

Gardiner started the year extremely high on some people's draft lists; likely a combination of being on the radar years prior to this draft, and looking like he had a lot of potential. He's still a solid prospect, but his stock has dropped throughout the year because it's looking less likely that he'll be dominating player.

He's got the size, and plays with a nice physical edge, but his skating and lack of offensive skills will probably limit his effectiveness to being not much more than a depth player at the NHL level. Gardiner is most like to be selected somewhere around the 4th round of the draft.