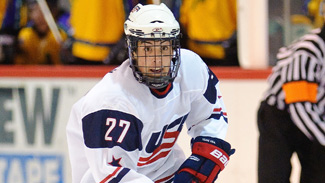 Heading into his junior year of high school, Faulk accepted a spot with the National Development Program in Ann Arbor. It was a smart move, as Faulk had tremendous physical talents, but needed work refining his game in the defensive end. Faulk excels on the offensive end of the ice, in part because of a booming slap shot from the point, which has helped net him numerous power play goals.

This past year, he was one of just three first-time draft eligible players to make it to the final round of cuts for the US World Junior team. In the fall, he helped lead his team to a gold medal at the World U18 Championships.Faulk will continue his hockey career next season for the University of Minnesota-Duluth.

September 22, 2008: "Faulk, Johns, and Tinordi can probably all go in the same category of being very big, very talented, but also very raw, which can lead to some ugly defensive mistakes from time to time, but if they all develop, they could be very good players. The question is will they develop fast enough for the US to be able to count on them in international play?"

November 17, 2009: "Central Scouting has UMD recruit Justin Faulk at 4th on their list. This is probably the highest I've seen anybody rank him so far(though inevitably, he's probably going to start being ranked high by everybody after this). He's a really athletic kid and has put up some really impressive offensive numbers. He's just a shade under 6' tall, in a draft that is loaded with very tall, very mobile defensemen, but if he keeps playing well, I could see him holding onto that spot."

January 11, 2010: "40. Justin Faulk-NTDP(Minnesota-Duluth)-Faulk is bound to be an interesting player to watch in this draft. Will teams believe that he can keep scoring at the pace he has been with the NTDP? For now, I'll say he's ranked in the right spot."

The big question surrounding Faulk in the draft is how will teams deal with his size. Faulk doesn't quite reach six feet tall and this draft is loaded with 6'3" and 6'4" behemoths that NHL teams usually favor. At the same time, most of those big defensemen are the type that do everything pretty well, but don't really stand in one specific area, whereas Faulk stands out as one of the most talented offensive players in the draft. Possessing that one elite level skill might be enough for teams to take a look at Faulk as high as the early second round of the draft. Otherwise, he seems likely to fall to the third or fourth round in the draft.

His future is definitely as a powerplay quarterback where he can set teammates up and use that booming shot from the point to score points. He'll need to improve his defensive play to justify a spot in an NHL lineup, but after three or four years at Minnesota-Duluth, that is certainly something that he should develop.