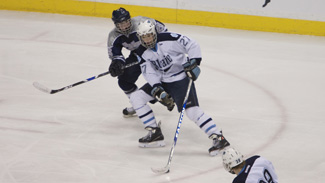 Nick Bjugstad first made the Blaine HS varsity as a skinny freshman with a great shot. As he grew into his body, he kept that amazing shot, and continued to develop his all-around game to the point that he became a top prospect for the NHL Draft.

Technically, Bjugstad should have been a junior in high school this past year, but when it started to become obvious that he would be a likely first round NHL draft pick, Bjugstad decided to accelerate his schooling so that he could play next season for the University of Minnesota, rather than having to play another year of high school hockey or play junior hockey in the USHL.

Bjugstad played center this year for the Bengals, though he may end up on the wing in the future. His skating is good, especially for someone as tall as he is, but it may be difficult for him to cover all that ice at the NHL level. That said, what he may lack is true speed, he makes up for with a lot of effort.

Bjugstad is a threat to score from just about anywhere on the ice because of his cannon of a shot. Though as he continues to move up levels of play, he'll have to become more accustomed to using his size to score garbage goals in front of the net as goalies get harder to beat from the high slot.

Needs to Improve: Play in front of the net, foot speed

Bjugstad is Metro Player of the Year- Star-Tribune-March 2010

Bjugstad Growing On and Off the Ice-NHL.com-May 2010

February 29, 2008: Blaine got things started when freshman Nick Bjugstad fired a beautiful slap shot over the shoulder of Centennial goalie Jack Hanna. Bjugstad didn't really do a lot the first time I saw Blaine play Centennial, but he was much more of a factor in tonight's game, especially early. Bjugstad has a pretty big frame, but still needs to add a lot of muscle, which isn't surprising given that he's a freshman. He's got a world-class shot, however, and as he matures, and gets more opportunities to use it, he could be a very dangerous player.

October 20, 2009: "Nick Bjugstad-Forward-Blaine(Minnesota commit)-Bjugstad is starting to look like he could be a first round draft pick this year. He really started to fill out last year and was dominant by the end of the Minnesota high school season."

November 2, 2009: "Nick Bjugstad: After last year's tournament, I wrote this: "I mentioned the Minnesota '92s being a little behind in terms of weight. Christian Isackson, Brett Patterson, and Nick Bjustad were listed at 170, 160, and 155 respectively. There's a huge difference between that and a guy that's a solid 200 lbs. and it showed. But I suspect that by next fall, those guys will have caught up and should be in the conversation for the 2010 draft." I'd say Bjugstad has definitely caught up. Last year he was listed at 5'10" 155 lbs. This year: a very legitimate 6'4" and a slightly less convincing 185 lbs. He maybe looks lanky and awkward at times, but that's understandable for a guy who has grown half a foot over the past year."

November 17, 2009: "It's tough to really call Nick Bjugstad a late-bloomer. Not when he was scoring goals for his team in the state tournament sectional finals as a 9th grader. And not when he's finishing high school a year early to play for the University of Minnesota next season. But last fall, Bjugstad was 5'10" 155 lbs. and while he may have been on the radar of some pro teams, he certainly wasn't considered a can't-miss-prospect. Now, Bjugstad is 6'4" 185 lbs and has drawn the attention of every NHL team as a potential first round draft pick.

He's always been gifted with a world-class shot, but his newfound size has turned him into a stronger skater and a physical force. He should be the top pro prospect in the state of Minnesota, and he should be the leader of a talented Blaine team that is likely to make another trip to the state tournament."

December 22, 2009: "If Nick Bjugstad didn't win Mr. Hockey last night, he at least made a really convincing argument. For most of the night, it looked like one guy from Blaine going up against about 8 guys from Minnetonka, and the one guy almost won."

Bjugstad has the talent and potential to be selected in the middle of the first round, where he has been projected most of the year, but he seems just so much more raw and unproven compared to the other players in that group with lots of junior hockey experience. In a weaker year, Bjugstad could have maybe been another Blake Wheeler, going much higher than expected because of his pure potential, but with it being such a deep draft year, I see him sliding to a little later in the first round while teams try to play it a little safer and make sure they get a solid, proven player.

Whichever team ends up with Bjugstad will have to be patient with him, and certainly shouldn't expect big numbers in his first season of college hockey. Depending on his development at Minnesota, Bjugstad has the upside to be a top six forward that can score goals on the powerplay, but he would also have the ability to play more of a defensive, checking role for a team.