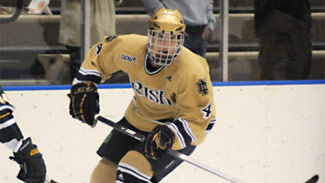 Sheahan first made a name for himself playing for his hometown St. Catharines Falcons in the Golden Horseshoe Hockey League, alongside future first round draft pick Daultan Leveille. Sheahan was selected by the Erie Otters in the OHL Draft, but decided on playing in the NCAA, and chose to play college hockey at Notre Dame.

Sheahan finished high school a year early and entered the University of Notre Dame this past season as one of the youngest players in all of college hockey. Notre Dame was projected to be one of the top teams in college hockey, but had an incredibly disappointing season. Sheahan played well, but his offensive numbers definitely suffered with the Irish's lack of production.

Sheahan is a big center that is known for playing a responsible two-way game. He is considered one of the best defensive forwards available in the draft, but his low production this year has led to some question whether he'll develop the offensive production to justify being a high first round draft pick.

Sheahan will be a sophomore at Notre Dame next season, but could be convinced to sign with the OHL if the team that drafts him pushes for it.

Sheahan Proving to Be a Quick Learner-NHL.com-January 2010

January 11, 2010: "5. Riley Sheahan-Notre Dame-Maybe the biggest surprise of the group to most people--if only because people really only look at the top 5-10 players listed. I'm fine with this ranking though. Notre Dame has sucked this year, but you always hear great thing about how Sheahan plays in all areas of the ice. He may slide a couple spots by the end of the year, but I could see him going in the top 10."

Sheahan's draft position will likely ultimately be decided based on how a team feels he will develop offensively. It's become popular theory that Sheahan, along with fellow NCAA player Tyler Pitlick, lack the high-end finishing ability to be big scorers in the NHL, while high school players like Brock Nelson and Nick Bjugstad are considered to have big scoring potential. This ignores the fact that one set of players was playing against 21 and 22 year old Division I netminders, while the other set was competing against goalies from public high schools of, in some cases, less than a couple hundred kids. The worst goalie Sheahan or Pitlick faced this year was at least a step or two ahead of the best goalie either Nelson or Bjugstad faced. Personally, I think very few players in this draft could have been in Sheahan's position this year and put up better numbers.

Comparing him to other players in a similar position, he didn't have a year comparable to a Jonathan Toews or Phil Kessel in his first year in the NCAAs, so Central Scouting's top five ranking is likely too high. But middle to late first round is not out of the question. Sheahan is very similar to a Ryan Kesler, who only scored 11 goals as a freshman at Ohio State, but has scored over 20 goals the last three NHL seasons, while being one of the more respected defensive forwards in the league.