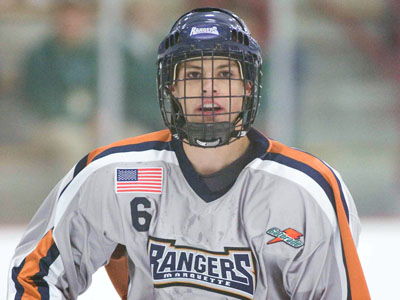 Kevin Gravel is a big defensive defenseman from Kingsford, Michigan, right on the border of Michigan's Upper Peninsula and Wisconsin. He was a top player for Marquette, Michigan's AAA programs, and as a 16-year-old, earned an invitation to the US NTDP tryout camp. He didn't make the team, but ended up playing against the U17 team the following year while playing with the Marquette Rangers of the NAHL. His impressive play in the NAHL helped earn him a spot with Sioux City in the USHL, where he played last season.

Gravel received serious interest from numerous schools including Northern Michigan, and Michigan State, but chose to commit to St. Cloud State in the WCHA, where his father Jim played college hockey. Gravel will likely join the Huskies next season, but could defer his college enrollment and play another year in the USHL.

Gravel's style of play is purely defensive. He had a very little offensive output with the Musketeers, but his smooth skating and punishing defensive play made him one of the more respected defenders in the league, and earned him invitations to represent the United States at the 2009 Ivan Hlinka Memorial tournament, the 2009 World Jr. A Challenge, and to play in the USHL All-Star game.

March 17,2008: "Kevin Gravel - Marquette (U18)Comment: Big, defensive defenseman. I think he might have flown under some people’s radar because he plays in MQT, but I like the way he plays."

A 6'4" defenseman that can skate pretty well will always be a valuable commodity at the NHL Draft. But Gravel seems kind of similar to another former Sioux City Muskie defenseman: Seth Helgeson. Helgeson was also a fast and physical defender, but his game was a little too one-dimensional, and he ended up slipping a bit on draft day down to the fourth round. The third or fourth round seems to be about the right time for a team to start looking at Gravel too.