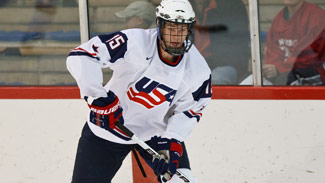 Jon Merrill first made headlines--and not just headlines in the hockey world, but the entire sports world--in October of 2006, when he committed to play college hockey for the University of Michigan. He was just 14 years, 8 months old at the time he committed, making him the youngest hockey player to ever make a verbal NCAA commitment.

Merrill, a Brighton, Michigan native, has been lucky enough to stay close to home for his hockey career. He grew up playing in the famous Little Caesar's AAA organization, and from there, moved down the road to Ann Arbor, Michigan to play for the US National Development Program. Next season, he'll move across town to play for the University of Michigan, also in Ann Arbor.

Though Merrill committed to college at a young age, he's not exactly a childhood prodigy blessed with amazing natural talents. He certainly has excellent size, helped by the fact that he's tenacious in the weight room, but he doesn't possess elite-level skating, puck handling, or shooting. Where Merrill really excels is in his understanding of the game. He's very good at always knowing where to be on the ice. He's very responsible defensively, and opportunistic offensively when the right situation arises.

Merrill's offensive game is still developing, but most likely, he projects out to a very solid shutdown defensive defenseman at the pro level. He's not likely to be a flashy player, but he should be big enough, fast enough, and smart enough to keep up with any team's top line.

Merrill Thinking His Way to the Top-NHL.com-March 2010

September 24, 2007: "Jon Merrill, Defenseman, Little Caesar’s U18(Mich. Commit)-Some people thought he might play in the USHL this year. I think it was a good choice that he stayed at the Midget Major level. Even though the level of play is a little lower, I think there is something to be said for getting experience being one of the best players on the ice, and getting experience playing special teams and leading a team. Merrill scored a nice goal on a slapper from the slot, but also gave up a goal on a weird turnover. Overall, I thought he looked excellent, especially considering that he’s still playing up a year. He is one of the best I’ve seen at pinching in on the powerplay. He also sees the ice well and can make great outlet passes."

April 6, 2009: "Jon Merrill(2010 eligible, Michigan commit): He's got a ton of talent and potential, and played a pretty responsible defensive game, but I think in order to take the next step, he needs to become more aggressive. He was paired with Cam Fowler and the difference between the two is that Fowler always looks like he wants the puck on his stick, whereas Merrill always looks like he's trying to get rid of the puck as quickly as possible. He was much better in the Sweden game, and actually scored a goal in the third period off a nice shot from the point."

January 11, 2010: "20. Jon Merrill-NTDP(Michigan)-With Merrill taking some steps forward offensively this year, I thought he'd be a little higher. I see him as more of a mid-first round pick."

Merrill's draft status has kind of a rollercoaster, going from surefire high first rounder as a youngster, to the beginning of the year, where most had him slipping out of the first round of the draft, to the end of this year where he's played really well and seems to have clawed his way back to the middle of the first round.

There's a very interesting comparison and debate developing between him and NTDP teammate Derek Forbort. Some thought Merrill outperformed Forbort at the U18s, and the two seem to be neck-and-neck heading into the draft. Forbort is all natural physical ability, but perhaps not as polished, while Merrill doesn't have the physical abilities of Forbort, but is a much smarter player. Forbort probably has the higher ceiling, but Merrill is likely the safer bet. It would be a tough choice between the two, and likely comes down to personal team drafting philosophy. Merrill is definitely worthy of a first round pick, and will likely go in the 15-25 range.

Merrill will likely play at least two years at the University of Michigan, but it's hard to see him staying much longer than that. One year in the minor leagues after that, and he should be ready to step in and contribute as a shutdown defensive defenseman.