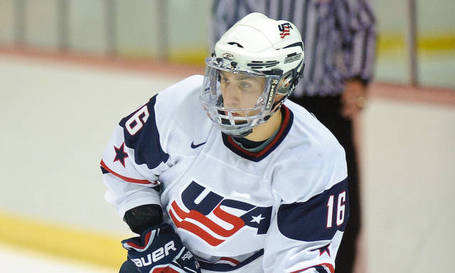 Technically, NTDP forward Jason Zucker, a native of Las Vegas, Nevada, could become the first NHL player from the state of Nevada. But Zucker has come a long ways from the Las Vegas strip. Like many top young hockey players, he's spent the past few years as a hockey vagabond. At the age of ten, Zucker moved to Los Angeles and played for the Los Angeles Hockey Club. He then moved back home for a few years and played with his hometown Las Vegas Outlaws AAA team. For his midget minor season, he decided to make the move to Detroit to play for the excellent '92 Compuware team. That increased exposure helped him earn a spot on the US NTDP team.

From there, most people are familiar with Zucker's impressive resume. In his first year, he was called up to play for the US U18 team that won the gold medal at the World Championships in Fargo, North Dakota. This past year, he was the only under-18 skater to make the US World Junior team which won a gold medal in Canada. He closed out his NTDP career this April with a third straight IIHF gold medal at the World U18s in Belarus.

Zucker's travels as a hockey player have served him well. As a 15-year old coming out of the Las Vegas AAA program, he was a good, undersized playmaker, but the type of player that didn't seem to have much of a future. After a year with Compuware, he transformed himself into a gritty, two-way player, that still had some offensive skill.

It was that hard-nosed defensive game that made him the first choice to be called up to the US U18 team while playing with the Under-17 team. Outsiders may have been confused why Zucker was selected over higher-scoring, higher-touted teammates, but those familiar with his game understood that he was perfect for the role that USA hockey wanted him to play.

Zucker will continue his hockey career at the University of Denver next season, which should be good for his development. The Pioneers will need to replace a lot of scoring from last year's team, which should push Zucker to keep developing the offensive side of his game, while maintaining his responsibility as a tough defensive player.

Zucker Beating the Odds to Reach the NHL-NHL.com-January 2010

September 22, 2008: "When I saw Zucker play last year at the Select 15s, I thought he was a nice player, but borderline to make the NTDP team. Over the course of the past year though, he's taken a huge jump in level of play, and now looks like he'll be the team's top center and one of the most complete forwards on the team."

April 6, 2009: "Jason Zucker(2010 eligible, Denver commit): Zucker is just an all-around smart hockey player. He understands the game really well and is a very solid player in all facets of the game. It seems like he wins every battle for the puck. He should make a nice contribution to this team despite being one of the younger guys"

January 11, 2010: "55. Jason Zucker-NTDP(Denver)-Everyone is going to say he's too low after seeing him play in the World Juniors, and I agree, to some extent. Zucker is a fantastic all-around player, but I don't know that he has the high-end offensive potential to be ranked much higher than maybe the second round."

Zucker is a bit of an interesting case. His pedigree of being one of the few underage players called up for the U18s two years ago, and for the World Juniors this year, would seem to suggest he's a first round pick. But part of the reason he was one of the first young players called up was because he fit so perfectly into a third or fourth line role.

He did deliver when given the chance to produce offensively against his peer group at the World U18 championships this spring, and did tie for his team lead with 29 goals this season, but in the long run, he doesn't project to put up the kind of numbers to be a top line six forward at the NHL level.

Also working against Zucker is that he stands at only 5'10", and looking over NHL rosters, their are very few players that size, and the ones that are tend to be exceptionally fast, which Zucker isn't.

That said, there's always a place for hard-working, high character type players in hockey, and Zucker may be one of the most complete players available in the draft. Zucker will likely be a three to four year college player, but by the time he is done with college, should be a versatile and valuable third line forward.