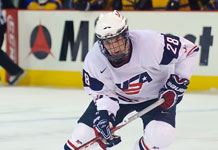 Stephen Johns is one of the rare Grade-A prospects to come out of the Pittsburgh-area. Though strangely enough, the big defenseman has almost been overshadowed by an even better prospect from the Pittsburgh area in forward Brandon Saad, who is projected as a top pick for the 2011 draft. Johns and Saad played together in the Pittsburgh Hornets AAA organization, both playing up a year, and succeeding at the U18 level as just 16-year-olds. Both caught the attention of NTDP, and Johns moved to Ann Arbor the next season, with Saad joining back up with him the following year.

At the NTDP, Johns was part of a very dynamic group of large, smooth-skating defensemen that were all capable of playing a very well-rounded game. Johns' combination of tremendous size plus skating ability makes him a prime NHL prospect. His style of play will likely tend towards more of a bruising, physical defenseman at the next level, but he is still capable of making a good first pass, and has a nice shot.

Johns is scheduled to play for the University of Notre Dame next season, but his OHL rights are owned by the Windsor Spitfires, who will likely make a huge push to sign Johns over the summer.

August 3, 2007: "Stephen Johns(Pittsburgh Hornets): A very big defenseman that skates really well. He has a lot of potential."

March 17, 2008: "Johns has always impressed me with his play. He should definitely be offered a spot [on the NTDP team]."

September 22, 2008: "Faulk, Johns, and Tinordi can probably all go in the same category of being very big, very talented, but also very raw, which can lead to some ugly defensive mistakes from time to time, but if they all develop, they could be very good players. The question is will they develop fast enough for the US to be able to count on them in international play?"

Many people are saying that this is an extremely deep draft, and Stephen Johns should be an excellent indicator of that. In a different year, a player with the size and raw talent of Johns would be a near lock to go in the middle of the first round of the draft. But with so many other big, talented defenseman available this year, there's enough holes in Johns' game that need tightening up that he'll likely slip into the second round. That said, it would be a great value pick to get a player with that kind of potential outside of the first round of the draft.

Johns will likely need at least two years of college hockey to learn the game and refine his style of play a little bit, but has the potential to eventually be a solid number two or three defenseman for an NHL team.