Share All sharing options for: Best of the West #32: Rylan Schwartz, Colorado College 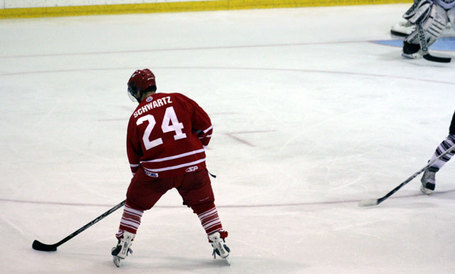 Role he'll likely play: Colorado College always finds ways to utilize fast scorers, but that will especially be the case this year, as the Tigers are desperate for offense, after the only two players who scored consistently for them last season, Chad Rau and Eric Walsky, graduated. Schwartz put up impressive numbers with Notre Dame, though the Hounds play in a league not known for producing a lot of strong WCHA players.

Why he is ranked here: Rylan is considered less talented than his younger brother Jaden, but he's still got plenty of skill and Colorado College could be desperate for players that can put the puck in the net. He was one of the scorers in the SJHL the past two years.

Why he'll be great: Schwartz kind of fell off the radar as a big-time prospect because he's not very big, but he's got big-time talent, and he may be one of the first places CC looks for offense this season.

Why he might not: Schwartz is a smaller player and is going to be playing against competition a couple steps higher than anything he's ever seen before. He seems like a boom or bust type of prospect.