Share All sharing options for: Best of the West #29: Eric Alexander, Ferris State 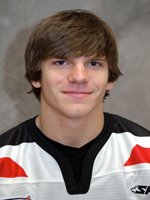 Role he'll likely play: Ferris State's top returning forwards for this season are a couple of smallish centers. Alexander is a physical winger that can score that would work well alongside one of those centers on one of Ferris State's scoring lines.

Why he is ranked here: Despite a frustrating goal drought in the middle of last season which led to his being traded from Chicago to Lincoln, Alexander still finished the season with a very respectable 49 points, which put him 29th in league scoring. Alexander was a bit of an unknown coming out of the Michigan high school ranks, which allowed Ferris State to scoop him up.

Why he'll be great: Alexander plays the hard-nosed style that Ferris State is known for, but he also has the talent to put the puck in the net.

Why he might not: Alexander struggled with his consistency last sesaon. With fewer games at the college level, a bad stretch could really kill his numbers.