Share All sharing options for: Best of the West #27: Jarret Granberg, Alaska 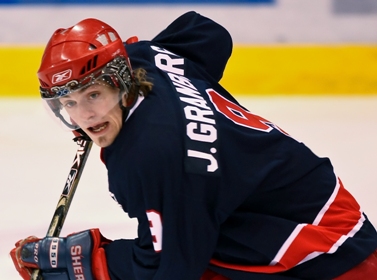 Role he'll likely play: Finding consistent offense has been a huge struggle for Alaska in recent years. Granberg is small, but he potentially brings a lot more offensvie firepower to the Nanooks.

Why he is ranked here: Granberg played three seasons in the AJHL and averaged a point per game in all three seasons. Last year, he was second in the league in scoring. He's not the biggest player, but he knows how to put the puck in the net.

Why he'll be great: He could be a huge asset to a powerplay that only scored 10% of the time last year.

Why he might not: He comes from a league in Alberta that produces a lot of tough players, but he's still only 5'7" 155 lbs. and may get pushed around a little too much to be effective.