Share All sharing options for: Best of the West #25: Luke Witkowski, Western Michigan 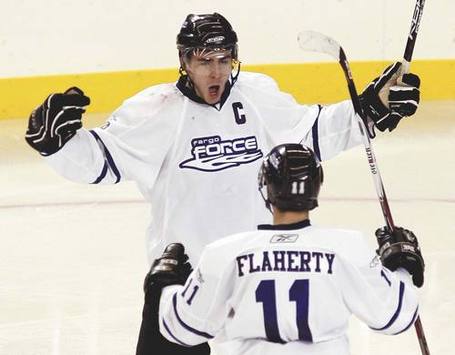 Role he'll likely play: Witkowski could be a very important player for Western Michigan, especially after the surprise early departure of Kevin Connauton to the WHL. The Broncos are perpetually one of the worst defensive teams in the CCHA, and aside from returning top defenseman Tyler Ludwig, could use pretty much a complete overhaul on defense. Witkowski isn't a big offensive guy, but should contribute in every other area.

Why he is ranked here: Witkowski's first year in the USHL was pretty rough with a brutal Ohio team, but he moved with the franchise to Fargo and last season, he showed what type of player he is capable of being. He finished second among league defensemen with a +30 rating. He's a solid defenseman that should bring a little more stability to Western's blueline.

Why he'll be great: Witkowski has the talent to be a number one defenseman in the CCHA. He could be a shutdown defenseman against other team's top lines.

Why he might not: His situation at Western Michigan will likely be more reminiscent of his time in Ohio than his time in Fargo. Plus/minus is the one stat where he can show off his abilities as a defensive defenseman, and that isn't likely to be very good on a team that gives up way more goals than it scores. He also took a lot of penalties with Fargo last season, for a total 118 penalty minutes, with only 10 of those coming from fighting majors.

Contrived Rivals-style star ranking: 3 and a half stars