Share All sharing options for: Best of the West #24: Mike Seidel, Minnesota-Duluth 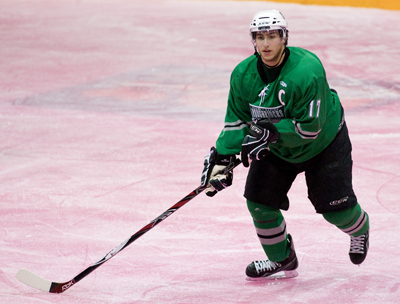 Role he'll likely play: The Bulldogs have added a lot of small, skilled players in their last two recruiting classes, but what Seidel gives UMD is some of the grit they've lost in the last couple outgoinging classes. UMD likes to crash the net and get tips and rebounds off of shots on goal. Seidel could some day be a replacement for MacGregor Sharp, who picked up a ton of goals in his senior season without ever moving too far away from the opposition's net.

Why he is ranked here: Seidel is an older freshman that played three seasons in the USHL.. He was good his first two years, and then great in his final year, when he scored 74 points and finished among the league leaders in scorers. He may not have the same high-end talent of some other prospects, but he'll likely be a solid four year contributor.

Why he'll be great: Duluth has some very good playmakers should be able to work around the perimeter in the offensvie zone, and Seidel could be the guy to stand in front of the goalie and bang home any rebounds they create.

Why he might not: Seidel's skating isn't his biggest strength. He could struggle away from home on some of the league's bigger rinks.