Share All sharing options for: Best of the West: #22: Steven Seigo, Michigan Tech 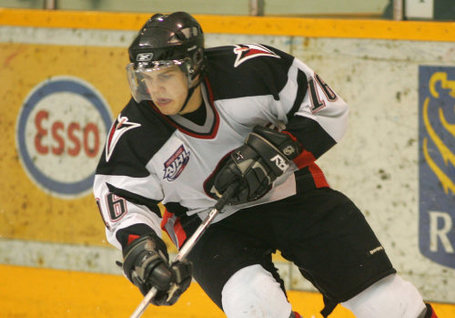 Role he'll likely play: Michigan Tech has a lot of ice time to fill on the blueline after losing John Schwarz and Geoff Kinrade to graduation. Seigo seems like a natural replacement for Kinrade; a player who isn't flashy, but will chip in some points and play in a lot of situations.

Why he is ranked here: Seigo was one of the top defensemen in the AJHL the past two years, and has quite a bit of international experience, representing Canada multiple times in the World Jr. A Challenge. He plays a very multi-faceted game and is coming to a team in desperate need of talented players.

Why he'll be great: MIchigan Tech finished in last place last season by quite a bit. That means there are going to be plenty of opportunities for new players to help turn things around. Seigo should get every chance to show off what he can do.

Why he might not: It's difficult for a player to shine and get much attention at Michigan Tech. This should likely be another tough year for them. Geoff Kinrade made it to the NHL a few weeks after Tech's season ended last year(Ok, it was with Tampa Bay, but they are technically an NHL team), but it's unlikely more than a few people would have listed him among the WCHA's best defenders last year. It can be hard to look good when your team is always losing.

Contrived Rivals-style star ranking: 3 and a half stars