Share All sharing options for: Best of the West #21: Nick Larson, Notre Dame 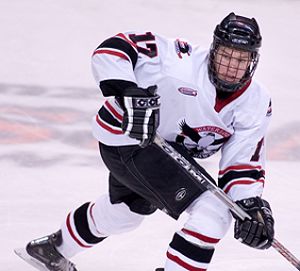 Role he'll likely play: Larson will likely come in and compete with some less talented, but more mature and experienced wings like Christiaan Minella and Dan Kissel for ice time on one of Notre Dame's lower lines. He won't be counted on for much offense right away, but he should contribute a grinding, physical defensive style of play that Notre Dame is known for.

Why he is ranked here: Larson may not have the offensive chops of some of the prospects already on the list, but he's a big power forward with enough potential to be drafted in the fourth round of the 2008 draft. After playing an extra year of junior hockey to gain more strength, he should be a tough player to match up against.

Why he'll be great: Larson seems like a perfect fit for Jeff Jackson's system. He's not a big scorer, but he shouldn't need to score a ton of goals, because he'll help hold the opposition to very few on the defensive end.

Why he might not: Larson's numbers plateaued in his second year of junior hockey. He may not develop into a top line power forward and instead, simply be a serviceable third or fourth line player.